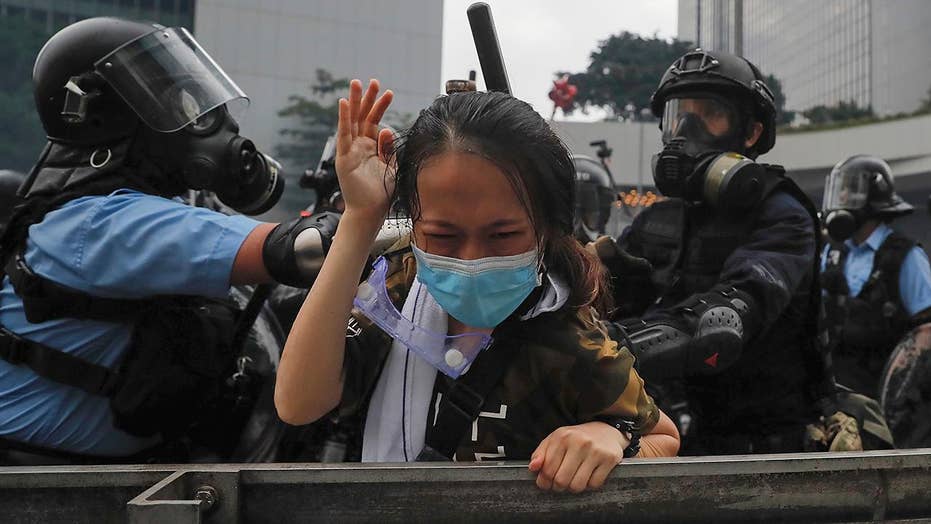 The debate over Hong Kong's controversial extradition bill that has fueled massive and sometimes violent protests was delayed for a second time on Thursday, as authorities revealed the amount of force to suppress demonstrators.

Stephen Lo, the Hong Kong commissioner of police, said that officers at one point "had no choice but to escalate the use of force to disperse the crowd" during violent clashes on Wednesday.

"The behavior of the violent protesters yesterday imposed a serious threat to the public order," Lo said.

It was the first time that Hong Kong police have used tear gas since that year's huge 79-day pro-democracy "Umbrella Movement" demonstrations, which marked the beginning of a shift to a tougher police approach.

Protests break out in Hong Kong over China extradition bill

The president of Hong Kong's legislature on Thursday postponed debate on the controversial bill as the city starts the cleanup process, according to the South China Morning Post.

“Members will be notified of the time of the meeting once it is determined by the president,” according to a circular obtained by the paper.

If passed, critics believe the extradition legislation would put Hong Kong residents at risk of being entrapped in China's judicial system, in which opponents of Communist Party rule have been charged with economic crimes or ill-defined national security offenses, and would not be guaranteed free trials.

Raymond Chan Chi-chuen, of the pro-democracy party People Power, told the SCMP that government may want to hold off debating the bill under public anger over it begins to subside.

“But it will not work, as long as they don’t retract the bill," he told the paper. "People are ready for further action.”

Hong Kong police have resorted to harsher-than-usual tactics to suppress protesters this week in the city's most violent turmoil in decades. (AP Photo/Vincent Yu)

Hong Kong's hospital management body said that public hospitals in the city were treating 79 people for protest-related injuries as of Thursday morning. The figures included both civilians and police officers.

Chinese foreign ministry spokesman Geng Shuang said the protests in Hong Kong are "not a peaceful rally, but a blatant, organized riot."

More protests and labor strikes are planned in an attempt to block the new legislation that would allow people to be extradited to mainland China; Benjamin Hall reports from London.

He added that "no civilized society ruled by law will tolerate illegal actions that undermine peace and tranquility."