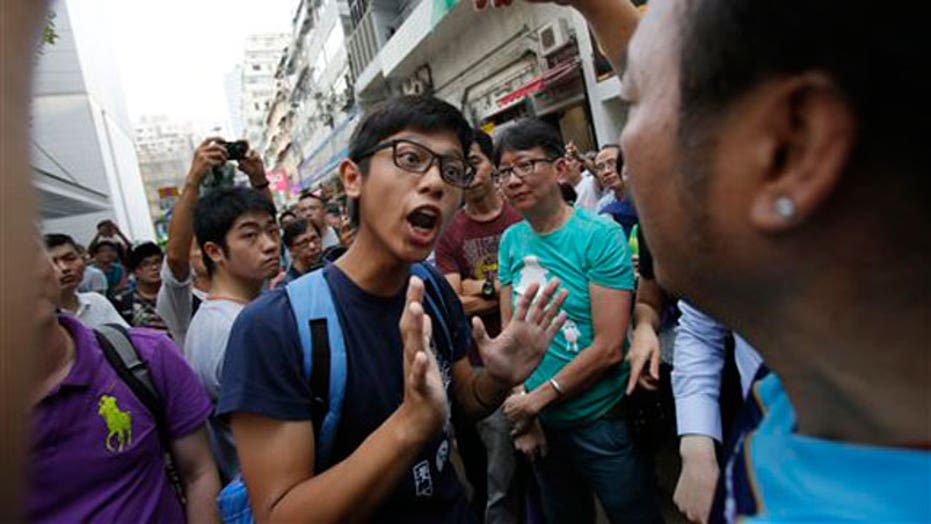 HONG KONG – Hong Kong's civil servants returned to work and schools were reopening Monday as a massive pro-democracy protest that has occupied much of the city center for the week dwindled.

Student demonstrators say they have taken early steps to begin talks with the government on their demands for wider political reforms, but actual negotiations have not started and many disagreements remain.

At the government headquarters, where some protesters agreed to remove barriers blocking roads Sunday ahead of the government's deadline to scale back their protests, the scene was orderly as government officials arrived for work as a few dozen remaining protesters looked on.

The crowds had thinned markedly after a week that saw tens of thousands of people fill the streets in peaceful protest. In Mong Kok, another protest site across the harbor where protesters had clashed violently with their opponents, a few hundred activists were staying put at the sit-in site.

Some activists disagree with the partial withdrawal at government headquarters, and an alliance of students say they will keep up their protests until details of the talks are worked out.

"If the government uses force to clear away protesters, there will be no room for dialogue," Lester Shum, one of the group's leaders, told reporters.

Alex Chow, another student leader, said he was not worried about the crowd dwindling.

"Because people need rest, but they will come out again. It doesn't mean the movement is diminishing. Many people still support it," Chow said.

Students occupying an area just outside city government headquarters agreed to remove some barricades that were blocking the building's entrance, after the government said it would do whatever was necessary to ensure 3,000 civil servants would have full access to their offices on Monday.

The partial withdrawal appeared to be part of a strategy to regroup in another part of town, as protesters were urged to shift from other areas to Hong Kong's Admiralty shopping and business district, a central location near the government's main offices that has served as an informal headquarters for the protests.

Protesters had feared that officials may clear the streets by force, but by Monday it's clear the government was settling for a partial victory in clearing some roads. The government indicated some disruptions were likely to continue.

"To restore order, we are determined, and we are confident we have the capability to take any necessary action," police spokesman Steve Hui said. "There should not be any unreasonable, unnecessary obstruction by any members of the public."

Television footage showed a man shaking hands with a police officer outside government headquarters and the two sides removing some barricades together. About 300 demonstrators stood by outside the government building's main entrance, but then many sat back down and refused to leave.

"I'm against any kind of withdrawal or tendency to surrender," said Do Chan, a protester in his 30s. "I think withdrawing, I mean shaking hands with the police, is a very ugly gesture of surrender."

The situation remained volatile across the harbor in Hong Kong's Mong Kok district, a shopping area where ugly confrontations broke out Friday and Saturday after opponents of the protesters tried to force them out. Many demonstrators heeded calls to head home or shift to the Admiralty area. A few hundred, however, remained.

"I don't know what the next step is, but I will not retreat. The people you see here will not retreat," said Burnett Tung, an 18-year-old student who has served as a volunteer at a food-supply station outside government headquarters all week.

Tens of thousands of people, many of them students, have poured into the streets of the semi-autonomous city since Sept. 28 to peacefully protest China's restrictions on the first-ever direct election for Hong Kong's leader, promised by Beijing for 2017. The protests are the strongest challenge to authorities in Hong Kong -- and in Beijing -- since the former British colony returned to Chinese rule in 1997.

China has promised that Hong Kong can have universal suffrage by 2017, but it says a committee of mostly pro-Beijing figures must screen candidates for the top job. The protesters also are demanding the resignation of Hong Kong Chief Executive Leung Chun-ying, the city's current leader. He has refused to step down.

With the standoff stretching into a second week, tempers have flared and patience was waning among residents who oppose the occupation of the streets and the disruption it has brought.

Police said they had arrested 30 people since the start of the protests. Protesters, meanwhile, complained the police were failing to protect them from attacks by mobs intent on driving them away.