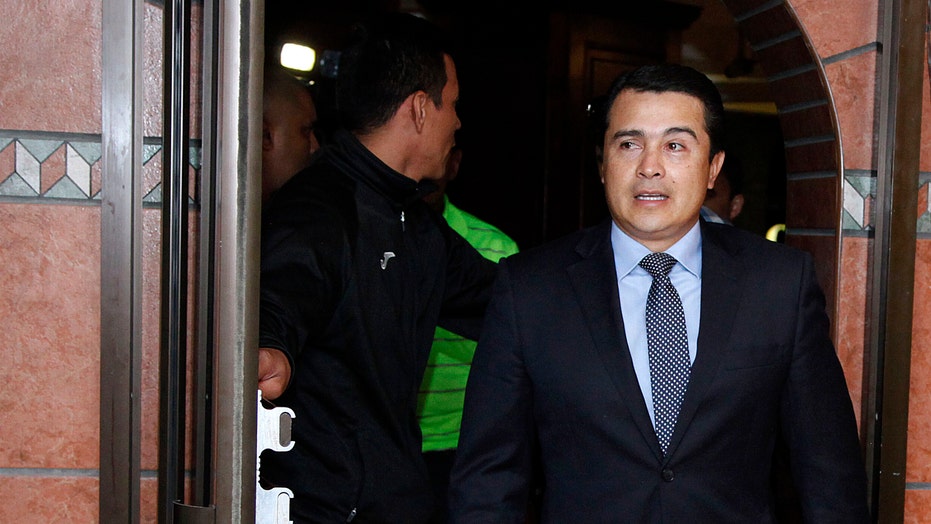 A New York City jury convicted the brother of the Honduran president Friday on cocaine trafficking charges in a massive drug conspiracy case. Prosecutors said he relied on “state sponsored drug trafficking” enabled by his brother, the Central American leader.

Juan Antonio “Tony” Hernández, a former Honduran congressman, was arrested in November in Miami and charged with conspiring to import tons of cocaine to the U.S., as well as weapons offenses and lying to the Drug Enforcement Administration. He was found guilty on four charges and faces possible life in prison.

“What can be said about a conviction based on confessed murderers?” asked the president.

The president, though not charged, was labeled a co-conspirator. Over the past two weeks of the trial, a series of witnesses-- many themselves confessed drug traffickers-- told investigators Orlando Hernández would look the other way in exchange for millions of dollars funneled to his campaign and his party.  During the trial the president tweeted that the prosecution’s allegations were “100% false, absurd and ridiculous."

"That is state-sponsored drug trafficking," said Assistant U.S. Attorney Emil Bove. "And with that level of power and control the defendant was virtually untouchable. The results of that are astonishing,”

The trial featured testimony that Mexican drug kingpin Joaquin “El Chapo” Guzman aided the conspiracy by giving $1 million to Tony Hernández to pass along as a bribe to his brother. Meanwhile, “El Chapo” was able to travel to Honduras twice in 2013 despite being one of the most wanted men in the world. Guzman was convicted in the U.S. in February on multiple charges -- including for drugs and murder--and is serving a life sentence.

Bove described a scheme that began with monthly “massive cocaine shipments” to the U.S. beginning in 2010 and said the Honduran president used the military to protect drug turf. He said Tony Hernández used national police to kill a rival, and the “ringleader” in that murder was promoted to chief of force.

A defense lawyer, Michael Tein, argued prosecutors had insufficient evidence and used witnesses who admitted to dozens of killings. His attorney promised to appeal the decision.

Juan Orlando Hernández assumed office in 2014. He was reelected in 2017 in an election widely criticized as fraudulent due to a constitutional ban on reelection.

Honduras, along with Guatemala and El Salvador --together known as the "Northern Triangle"--is the homeland of thousands of migrants who have fled for the U.S. border with Mexico, saying they are escaping a poor economy and oppressive gang crime. The Trump administration cut aid earlier this year to "Northern Triangle" countries until their countries take action to stem the flow of migrants, but recently resumed some of the aid in exchange for their work on mitigating migration. Orlando Hernández has proclaimed to be fighting drug traffickers but the conviction of his brother and the accusations against him could undermine any such claim.