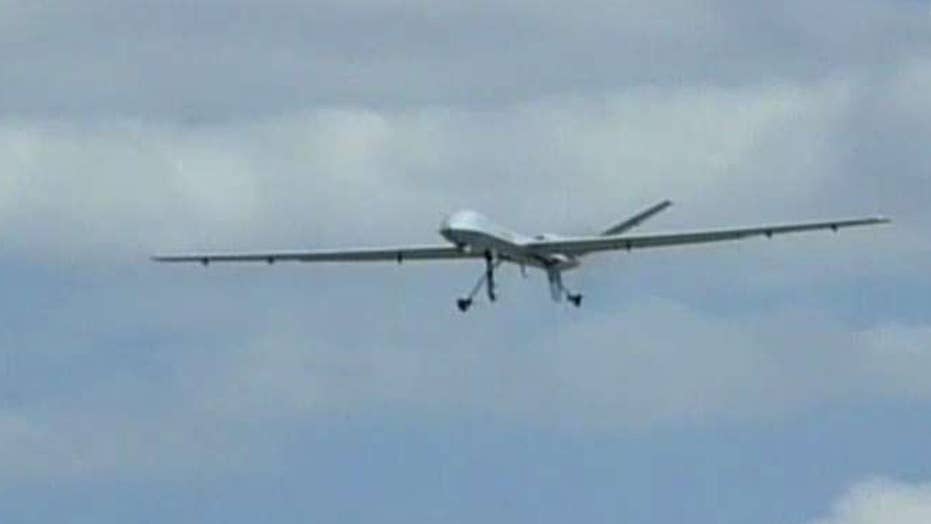 As the battlefield use of commercial drones by ISIS extremists becomes more prevalent and sophisticated, there is growing concern that these unmanned aircraft systems could be used in terror attacks inside the U.S.

Drones, relatively inexpensive and easily purchased online or at a local big-box retail store, have been modified by ISIS fighters to drop grenades or to surveil troop movements overseas. The terror group continues to bolster its use of weaponized and surveillance drones against Iraqi and U.S. forces. In April, U.S. Central Command told Fox News that coalition troops have as many as 30 encounters a week with unmanned aerial vehicles.

In fact, ISIS announced the formation of a new drone warfare unit in January, whose sole purpose is to inflict “a new source of horror for the apostates.”  And, according to a January report by the Combating Terrorism Center at West Point “we should expect the Islamic State to refine its drone bomb-drop capability. It is likely that the Islamic State’s use of this tactic will not only become more frequent, but more lethal as well.”

Col. John Thomas, CENTCOM Director of Public Affairs, confirmed this increased drone use to Fox News in an e-mail.

“It is something we’ve observed and it’s an emerging threat,” he said. “We are concerned about it.  We first saw an initial surge in ISIS drone activity in late-January.  We work with teams across the Department of Defense to address and neutralize the enemy use of unmanned systems.”

Thomas went on to say they are “defeating ISIS drones regularly on the battlefield” and claims unmanned aircraft vehicles, or UAVs, “have had little real impact on the overall fight.”

Combined Joint Task Force officials echoed these comments, saying that “the Coalition takes this threat seriously and has implemented increased force protection measures and improved UAV counter-measures to protect Coalition forces and our partners on the ground.”

They also stated ISIS drones will not dramatically impact the battlefield, but add that “the Coalition remains responsive to this emerging threat through both active and passive measures, and we continue to improve force protection measures for all our Coalition personnel and Iraqi and Syrian partner forces.”  What is more interesting, they say, is “the way our partners are now using the drones against the enemy.  The Iraqi Security Forces have turned the tables on ISIS with its drone technology.”

In April, the United States Army published a handbook entitled “Counter-Unmanned Aircraft System Techniques” to help train soldiers to defend against the threat during operations.  The Army says that “defending against UAS is a difficult task and no single solution exists to defeat all categories of the LLS [low, slow and small drones] threat.”

So what does increased weaponized commercial drone activity overseas mean to the United States?

The Federal Aviation Administration estimates small, hobbyist unmanned aircraft system purchases may grow from 1.9 million in 2016 to as many as 4.3 million by 2020.  That is a large number of potential weapons that can be controlled remotely and accurately.

According to the FBI, in 2011, a man named Rezwan Ferdaus “planned to obtain a remote-controlled aircraft similar to a small drone aircraft, fill it with grenades, and fly the plane into the Pentagon using a built-in GPS system.”

The government is on alert.

Fox News contacted the FBI and FAA to ask about any preparations that are being made to combat the potential threats.  The FBI did not immediately respond and the FAA deferred comment to the Department of Homeland Security.

AIR FORCE WORKS TO TRACK ISIS DRONES TO THE SOURCE

According to a DHS spokesperson, “DHS does consider commercial drones configured or modified to employ explosives or weapons a concern.  This is due to low-cost, ease of access, and the quick-pace of this evolving technology to adapt beneficial Unmanned System equipment for nefarious purposes.”

In January, a terrorist who shot and killed 39 people in a nightclub in Turkey, had two drones seized from his apartment, leading to speculation that he may have been preparing an aerial attack.

“The massive increase in affordability and accessibility and considering the rise in incidents overseas, it is of concern.” Dan Gettinger, Co-Director of The Center for the Study of the Drone at Bard College told Fox News, but he added “It is hard to know the degree of seriousness to which we should take it.”

He says that there are far more destructive and terrifying ways to attack large groups of people.

A 2008 study by the Rand Corporation, a non-profit national defense institute, found that is the case, but said the advantage that drones provide to terrorists “is not, therefore, in the destructive power that they can carry; rather, it is in the way they carry it and the distance from which they allow an adversary to control its delivery. The value of this advantage to an adversary and, as a result, the likely attractiveness of these systems will therefore be driven by the benefits of aerial attack in solving specific operational problems.”

“The questions that remains to be seen is whether a drone attack will ever be considered strategically more effective than other forms of terrorism,” Gettinger told us, adding “Hopefully that is something we will never have to find out.”