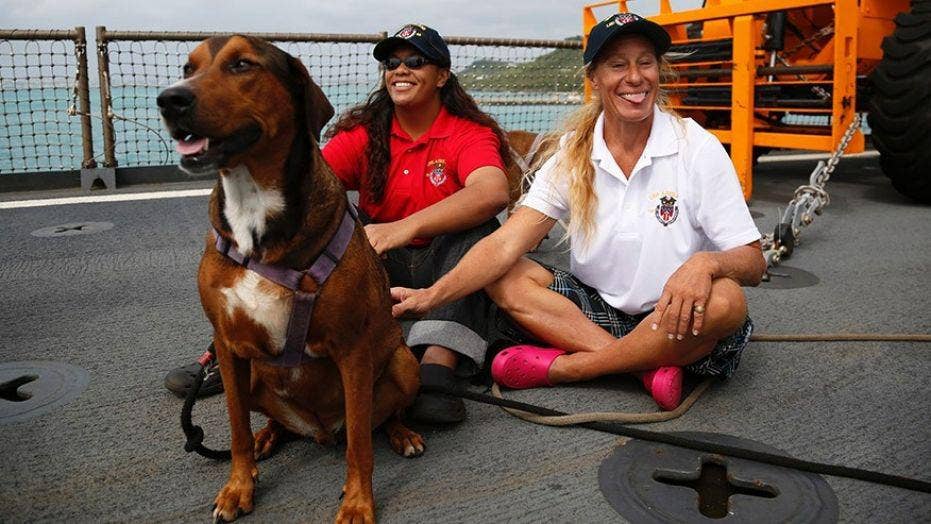 The two Hawaiian women who have been under scrutiny over their tale of survival in the Pacific Ocean surfaced on NBC’s “Today Show” Tuesday to defend some of the more sensational claims, including doubling down on a supposed mass shark attack that experts immediately questioned.

Jennifer Appel told Matt Lauer the experience of 20- to 30-foot tiger sharks ramming their boat in a coordinated attack for more than six hours was “terrifying, absolutely terrifying.”

“We were too ignorant to realize what was going on and the sharks had been telling us, you are in our living room and you are not leaving fast enough,” she said.

Appel, who says she was on a sailboat with Tasha Fuiava and two dogs on a journey from Hawaii to Tahiti, was picked up by the Navy in late October. Since then, Coast Guard officials, sailing experts and scientists have emerged to poke holes in the pair's story.

Scientists who study sharks told The Associated Press the sort of behavior described by the women has never been recorded, as tiger sharks don’t jump out of the water or make synchronized attacks, and that they grow to only about 17 feet in length.

University of Hawaii professor Kim Holland also told the AP he was unaware of any kind of shark repeatedly attacking a boat.

When pressed by Matt Lauer as to why the women didn’t activate an emergency beacon -- or EPIRB -- on board the boat, Appel said she preferred to be in the graces of God.

“The sharks were six inches away,” she told NBC. “And using an EPIRB means that in the location where we were it’s probably four hours to a day before the coast guard would have found us on a flyover. So we took our chances with the man upstairs who gave us grace and allowed us to be here today.”

Lauer also asked the women about a severe storm they claimed they were caught in, that allegedly tossed their vessel with 60 mph winds and 30-foot seas for three days.

The claim was made despite records and NASA satellite images showing there was no severe weather in their area at the time, The Associated Press has reported. But the women said Tuesday that you had to have been there to see what it was like.

HOLES EMERGE IN TALE OF SURVIVAL

“I am used to sailing in the Hawaiian waters so I’m used to small storms coming up but I didn’t expect it to be what it was,” Appel told Matt Lauer. “I said ‘Tasha, you know, if I make a mistake doing this, we’re going to die tonight.' And she said ‘oh I trust you, go ahead, have fun.’”

Fuiava – who at times could be seen anxiously tapping her foot during the interview – gave a conflicting response earlier in the segment when asked by Lauer about riding out the alleged storm.

“I’m actually a heavy sleeper. So when she told me ‘bunker down with the boys’ and go to sleep, I knocked out like the dead. It didn’t phase me,” Fuiava said.

Appel also noticeably rattled off the names of products she said she had with her on the boat, including holding up a GPS device for the studio cameras. During another line of questioning from Lauer, she blurted out the name of a company who made a water purifier.

“Does it bother you that you come back and people are questioning whether this ordeal existed in the Pacific Ocean, or existed somewhere up here?” Lauer asked, pointing to his head.

“It’s a unique situation. We weren’t expecting it,” Appel replied. “We did not call the media, the Navy did.”