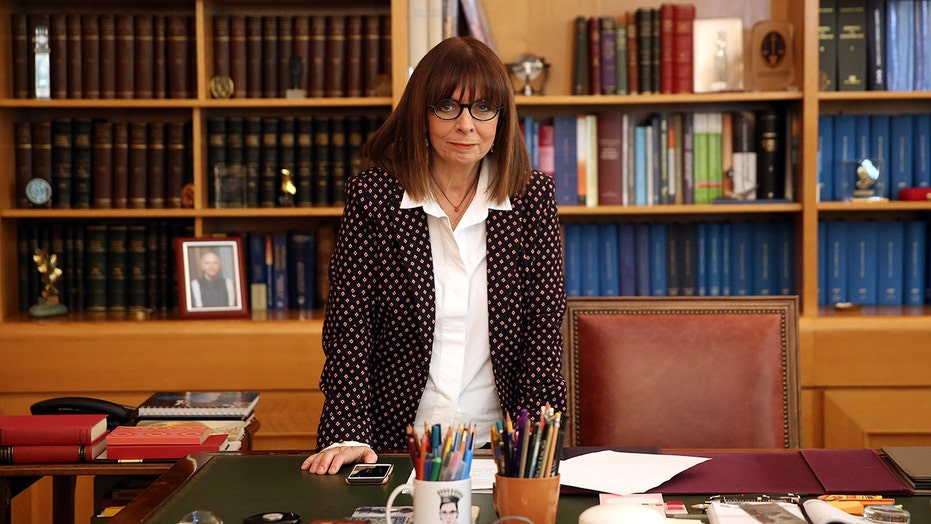 Speaking after being formally informed of the parliament vote, Sakellaropoulou said she would aim for the “broadest possible consensus” in the course of carrying out her duties.

In her first comments as president-elect, the judge noted the “difficult conditions and challenges of the 21st century, including the financial crisis, climate change, the mass movement of populations and the consequent humanitarian crisis, the erosion of the rule of law and all manner of inequalities and exclusions.”

Prime Minister Kyriakos Mitsotakis nominated Sakellaropoulou as a non-partisan candidate who would enjoy broad support from across the political spectrum. All major parties voted in favor of the nomination, with Sakellaropoulou being elected to the largely ceremonial post in a 261-33 vote, well above the 200 votes required. Six lawmakers were absent.

Greek Prime Minister kyriakos Mitsotakis applaud during a parliamentary session to vote for the new Greek President, in Athens, on Wednesday, Jan. 22, 2019. High court judge Katerina Sakellaropoulou has been elected at Greece's first female president with an overwhelming majority in a parliamentary vote. (AP Photo/Petros Giannakouris)

Greece has a historically low number of women in senior positions in politics, and Mitsotakis had been criticized for selecting a nearly all-male Cabinet after he won general elections in July 2019. In the current Greek Cabinet, all but one of the 18 senior positions are held by men.

Speaking after the vote, Mitsotakis described Sakellaropoulou, 63, as a “great jurist, a great judiciary personality who unites all Greeks from the minute this procedure began.”

He said he sought to nominate a candidate who would “symbolize the youth of the Greek nation, and I am glad that the result confirmed that on the big issues, we can finally agree.”

Greek lawmakers applaud during a parliamentary session to vote for the new Greek President, in Athens, on Wednesday, Jan. 22, 2019. High court judge Katerina Sakellaropoulou has been elected at Greece's first female president with an overwhelming majority in a parliamentary vote. (AP Photo/Petros Giannakouris)

European officials congratulated Sakellaropoulou, with European Commission President Ursula von der Leyen welcoming the election of Greece’s first female president in a tweet that said the country was “moving ahead into a new era of equality.”

Sakellaropoulou, who has headed the Council of State, the country's highest administrative court, since 2018, is to begin her five-year term in March, when the term of the current president, veteran conservative politician Prokopis Pavlopoulos, expires.