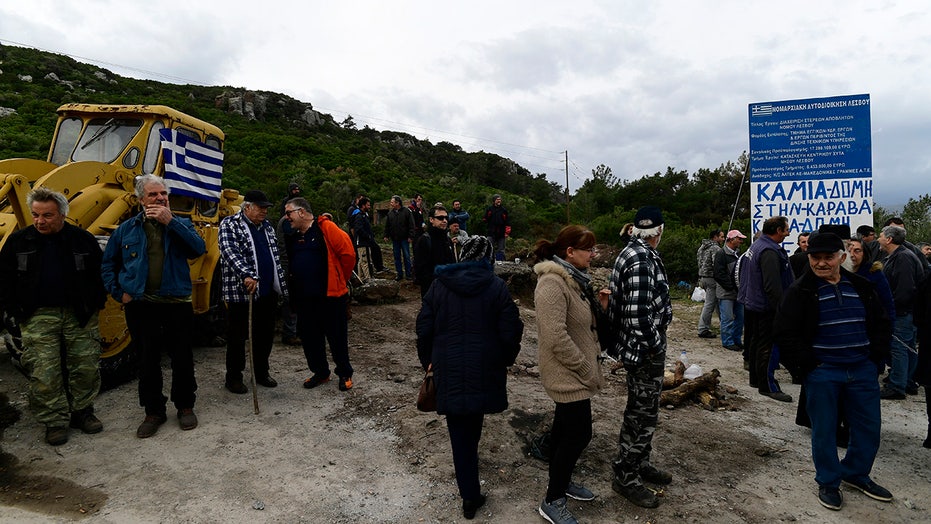 Demonstrations on the Greek islands of Lesbos and Chios kicked off for the fourth consecutive day Thursday to protest government plans to build new migrant detention centers amid a renewed influx of refugees mostly coming across the sea from Turkey.

Protests turned violent Wednesday, with hundreds of demonstrators attacking police guarding the building sites of future migrant detention camps on Chios and Lesbos. A crowd also stormed a Lesbos army camp where riot squads deployed from Athens had been staying.

Officials said 43 police officers were injured in violence on Lesbos on Wednesday. Two of those officers suffered gunshot wounds in their legs, France 24 reported. Though some were armed with shotguns, protesters mostly engaged in hand-to-hand combat with police, The Guardian reported. Officers used tear gas and stun grenades to diffuse the crowd.

Local residents gather at a roadblock in Karava, on the northeastern Aegean island of Lesbos, Greece, Thursday, Feb. 27, 2020. Greece's government hoped to defuse tensions after protests over plans for new migrant camps on two of its islands Wednesday turned into violent clashes between police and local residents, some armed with Molotov cocktails and shotguns. (AP Photo/Michael Varaklas)

Another nine officers were injured in Chios, where a mob burst into a hotel being used by riot police and beat officers resting in their rooms. They also stole clothing and other belongings before fleeing, The Guardian reported. Greek officials said a total of 10 protesters were injured in the violence on both islands, France 24 reported.

After years of living on the frontline of the crisis, Lesbos and Chios residents oppose the government building any new migrant detention centers on their islands, and, instead, want asylum seekers relocated to the mainland while they’re processed or await deportation. Existing migrant camps on the islands are already several times overcapacity.

Greece's government, which is based in Athens, insisted it will continue its plan to build new migrant camps on the island in an effort to create order, as overflowing migrant camps currently pose safety and health risks, especially amid a potential outbreak of the coronavirus, The Guardian reported.

The Aegean Islands have seen a recent resurgence in migrant influx in recent months -- comparable to heights seen in 2016 during the peak of the Syrian Civil War. As Russian-backed regime forces continue their offensive against Syrian rebel groups in Idlib, Greek islanders anticipate more refugees will reach their shores within the coming months.