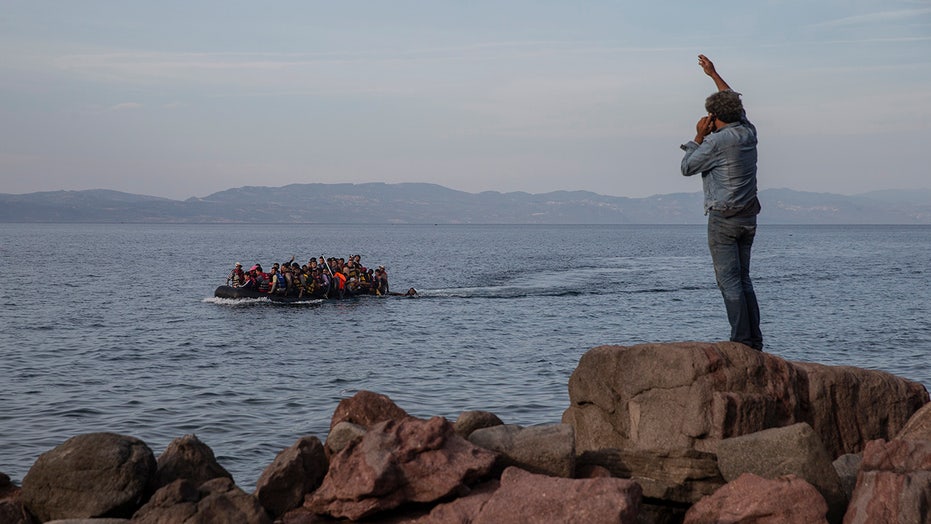 Greece announced a plan Thursday to install a “floating wall” in the Aegean Sea to help curb a recent resurgence in the flow of migrants arriving on its islands’ shores from Turkey, according to reports.

The Defense Ministry based in Athens called on vendors for offers to build an about 1.6-mile-long floating barrier to be placed in the waters off the island of Lesbos to separate some of Greece’s most eastern islands from the Turkish mainland.

The net-like structure would peak about 1.64 feet above sea level and include lights to make it visible at night, officials said, according to Reuters.

The government welcomed bids for a contract worth about $551,000 to create a “Floating Protection System” designed to assist the armed forces’ role in the management of the refugee crisis and constantly increasing migration flows, the National Herald reported.

In this Wednesday, Sept. 9, 2015 photo refugees and migrants aboard an overcrowded dinghy as they cross the Aegean Sea, from Turkey, that is seen in the background, to the coast of Lesbos island, Greece.  (AP Photo/Petros Giannakouris)

The pilot project was announced amid complaints from Lesbos residents over a lack of resources ,as more than 18,000 migrants crowd the island’s Moria camp, the Herald reported.

“The invitation for floating barriers is in the right direction,” Defense Minister Nikos Panagiotopoulos told Skai Radio. “We will see what the result, what its effect as a deterrent will be in practice…It will be a natural barrier. If it works like the one in Evros, it can be effective.”

He mentioned the cement and barbed-wire fence Greece built along its northern border with Turkey in 2012 as part of its effort to slow the travel of migrants entering the country unchecked.

Nearly 60,000 migrants arrived on Greek shores in 2019 – about 80 percent of which landed on the islands of Chios, Samos and Lesbos, all located a short distance from Turkey, according to the United Nations High Commissioner for Refugees (UNHCR). Between January and October of 2019, at least 66 migrants died in the eastern Mediterranean Sea trying to reach the European Union, according to the International Organization for Migration.

The Greek Coast Guard and EU border patrol Frontex have been working to deter human traffickers from sending migrants across the Mediterranean on rubber dinghies and overcrowded rafts. Hundreds have died when these vessels capsized since the onset of the Syrian refugee crisis in 2016, the Herald reported.

Migrants walk between makeshift tents outside the perimeter of the overcrowded Moria refugee camp after a rainfall on the northeastern Aegean island of Lesbos, Greece, Tuesday, Jan.28, 2020. Greece has been the first point of entry into the European Union for hundreds of thousands of people fleeing war or poverty at home, with most arriving on eastern Aegean islands from nearby Turkey. (AP Photo/Aggelos Barai)

Migrant and refugee advocacy groups argued Greece’s floating barrier won’t help deter the arrival of migrants and will only make the travel routes more dangerous. Some say the government ought to focus on speeding up the asylum process, providing a quicker way to vet migrants and bring them from overcapacity island camps to the mainland.

“We see, in recent years, a surge in the number of barriers that are being erected but yet people continue to flee,” Βoris Cheshirkov, a spokesman in Greece for U.N. refugee agency UNHCR, told Reuters. “Greece has to have fast procedures to ensure that people have access to asylum quickly when they need it.”

“This proposal marks an alarming escalation in the Greek government’s ongoing efforts to make it as difficult as possible for asylum-seekers and refugees to arrive on its shores and will lead to more danger for those desperately seeking safety,” Massimo Moratti of Amnesty International said in a statement.

“The plan raises serious issues about rescuers’ ability to continue providing life-saving assistance to people attempting the dangerous sea crossing to Lesvos. The government must urgently clarify the operational details and necessary safeguards to ensure that this system does not cost further lives.”

Conservatives took control of the Greek government following the July 2019 snap elections. The Radical Left SYRIZA New Democracy lost ruling power after years of advocating for a more open-door policy in the country, the Herald reported. The six-month-old center-right government has promised to take a tougher line on the migration crisis and plans to set up detention facilities for migrants denied asylum and to speed up deportations back to Turkey. Under a 2016 migration agreement between the European Union and Turkey, the Turkish government was promised up to $6.6 billion to help stop the mass movement of migrants to Europe.