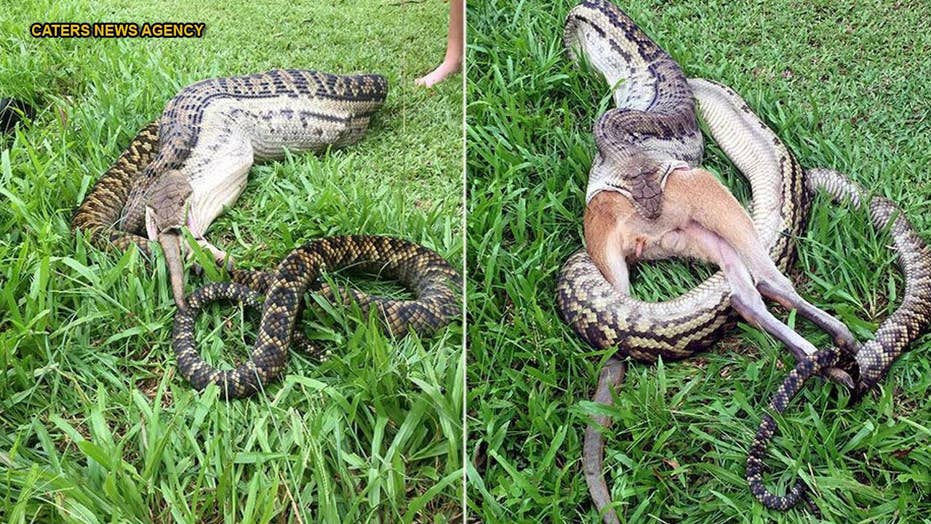 A giant python was caught on camera devouring a helpless wallaby earlier this month in Australia. The handlers who removed the scrub python, were 'polite enough to let him finish' before moving the snake to a safer location. Scrub pythons are the longest snake in Australia, and are known for their 'grumpy attitude.'

Wallaby was the meal of choice for one python in Australia.

JMB Reptiles, a snake removal and relocation service located in Innisfail, took to Facebook earlier this month with photos of a scrub python, more formally known as an amethystine python, devouring a helpless wallaby.

“Looks like wallaby’s on the menu tonight,” the post reads, adding the snake handlers were “polite enough to let him finish before he was given a lift to his new home away from Flying Fish Point,” which is a coastal town in Queensland.

The handlers explained that the serpent was later removed and relocated to their home, where it was monitored “until we are comfortable that it will not regurgitate the wallaby when it’s released.”

“It was scary to see how big the snake could get it’s mouth to eat it. It had sized up a German shepherd before the wallaby,” they added.

Many Facebook users expressed shock the reptile was able to chow down on such a large animal.

“It was scary to see how big the snake could get it’s mouth to eat it. It had sized up a German shepherd before the wallaby."

“How incredible our wildlife can be! Great pics, thanks for sharing!” another wrote.

“Frightening to see a snake swallow a whole wallaby,” a third commented.

Scrub pythons — the longest snake in Australia, according to the Australia Zoo — have muscular bodies which aid them when climbing trees. While the serpents are native to Australia, they can also be found in New Guinea.

They're known for their “grumpy attitude,” according to the zoo, which noted the scrub python is normally “very shy” but “will hiss loudly when aroused.” That said, these creatures typically won’t bite unless provoked.

As of Wednesday afternoon, JMB’s post had been shared more than 700 times.