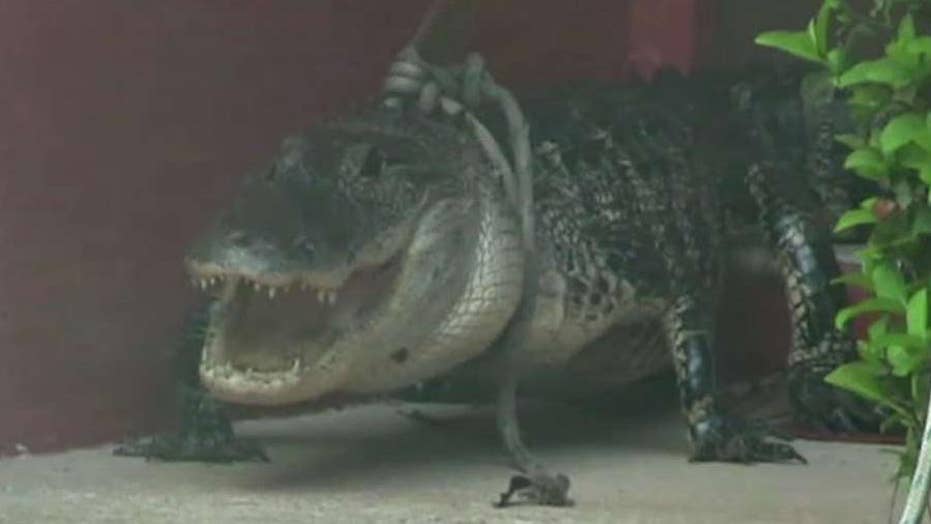 A 350-pound gator greeted an unsuspecting Florida woman at her front door Tuesday morning, causing the panicked homeowner to flee.

When Geri Staples heard the aggressive knock, she peeked out of a clear window in her door to see who — or what, rather — was causing the ruckus. To her surprise, an estimated 10-foot-long alligator was on the other side, and it appeared to be frustrated.

"I saw him right there and he hit the door, and that’s when I ran [upstairs]. I wasn’t sure if he kept pounding like that if he could actually open the door with his snout if he hit hard enough. So I wasn’t taking any chances,” Staples, who lives in Merritt Island, told WESH.

Neighbors across the street watched the bizarre scene unfold.

"That's the biggest gator that has been here in the last 20 years that we have seen," neighbor Corey Larkam told WKMG-TV.

According to the news station, neighbors said the massive gator was spotted taking a stroll around the neighborhood earlier that day. Neighbors' attempts to wrangle the gator and remove it from the property were unsuccessful, so they called local wildlife officials for backup.

Wildlife officials told WESH the gator could have been up to 60 years old. A trapper reportedly shot and killed the gator after a fierce struggle.

“I’m just glad they took him away, so I don’t have to worry about him anymore,” Staples added.

Anyone who believes an alligator is posing a "threat to people, pets or property" should call FWC’s toll-free hotline at 866-FWC-GATOR, Snapp said.