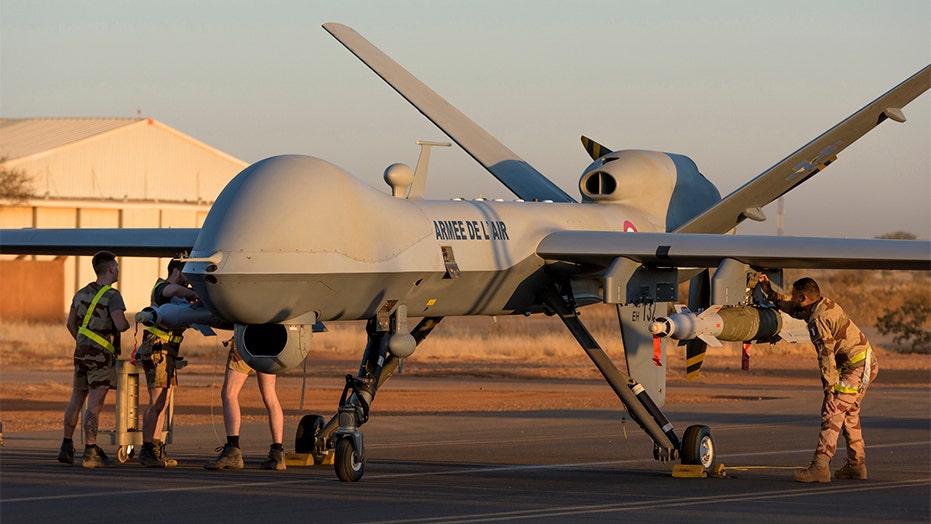 France joins a tiny group of countries that use armed drones, including the United States.

A defense ministry statement said the drone strike took place Saturday while French President Emmanuel Macron was visiting neighboring Ivory Coast, where France has a military base. Macron already had announced that French forces had killed 33 extremists that day.

The drone strike targeted jihadists in the Ouagadou forest, where a group known as the Macina Liberation Front is active. French commandos “were attacked by a group of terrorists who infiltrated on motorcycles,” the ministry said.

“Working in a difficult environment, in a densely wooded region, this action was made possible by the action of ground troops supported by the air component,” the ministry said.

The French military successfully tested its weaponized Reaper drone for the first time last week, and Defense Minister Florence Parly called the drones “protectors for our troops and effective against the enemy."

She said they allow French troops more discretion and flexibility, and insisted that France will respect rules of armed conflict in using the drones. She had announced in 2017 that France would arm its surveillance drones after the country suffered a string of extremist attacks.

The use of armed drones has been somewhat sensitive in France, notably because of civilians killed by U.S. drones in Afghanistan and Somalia.

France, Mali's former colonial ruler, led a 2013 military operation to oust Islamic extremists from power in northern Mali, where they had implemented a harsh version of Sharia law. Since then, however, Mali's military has failed to stem the violence despite support from the French and a United Nations peacekeeping mission.

This year has been particularly deadly for Malian forces, prompting the president to reassign some soldiers in the most remote and vulnerable desert outposts.

The French military has 4,500 personnel in West and Central Africa. Macron is set to discuss the future of France's military mission in Africa's Sahel region at a meeting in France next month with presidents from the countries taking part in the regional G5 Sahel counterterror force.