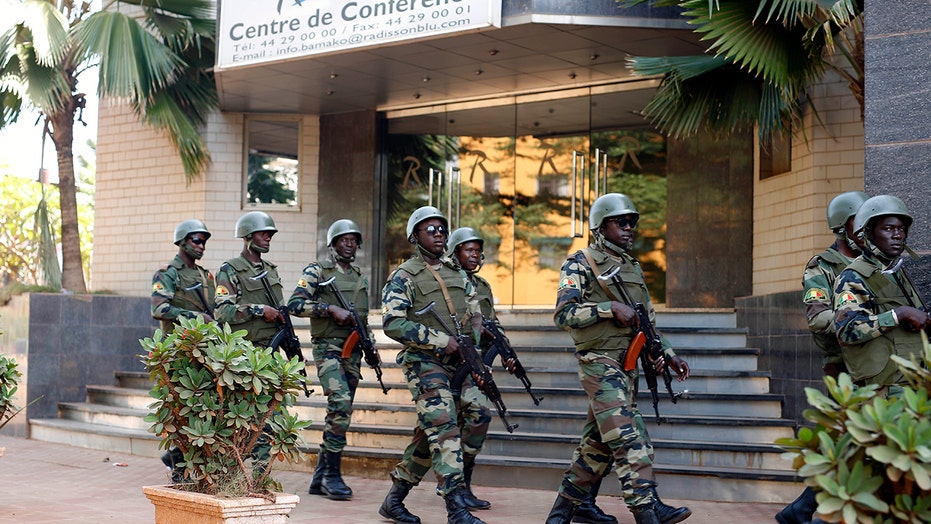 A jihadist attack targeting military post in Mali killed least 53 soldiers and one civilian in the second such assault in a month, the government said Saturday.

The military post in Indelimane, in the Menaka region near the border with Niger, was attacked Friday and the assailants were believed to have fled across the border.

Ten people are said to have survived the attack, Sky News reported.

There was no immediate claim of responsibility, but the militants in the area have been linked to the Islamic State terror group.

The violence came one month after 41 soldiers were killed and 20 others went missing during two attacks on Malian soldiers taking part in a regional counterterrorism force.

In this Saturday, Nov. 21, 2015 file photo, soldiers from the presidential guard patrol outside the Radisson Blu hotel in Bamako after it was attacked by Islamic extremists armed with guns and grenades. (AP)

Government spokesman Yaya Sangare confirmed the deaths on Twitter, saying “significant material damage” has been caused in the attack.

“Reinforcements have been sent to the scene and the situation is under control with the support of the French military, which is helping to evacuate the wounded,” he later told the Associated Press.

The new violence is likely to further raise tensions in the capital, Bamako, where military families have already protested in the streets. They say that soldiers are not being given the resources on the ground that they need to confront an array of jihadist groups.

The two latest attacks are among the most deadly against the Malian army since a 2013 French-led military intervention to oust the jihadists from power in the major towns of northern Mali.