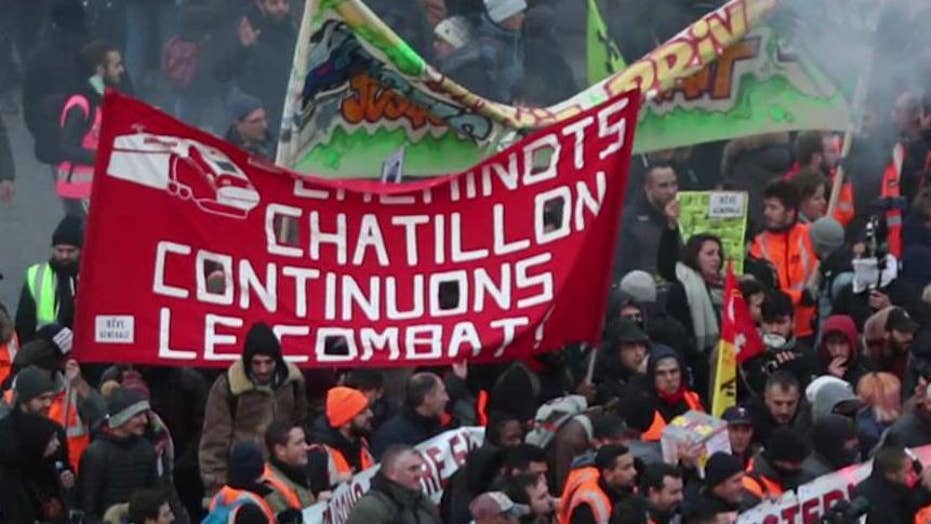 France’s prime minister announced a pension overhaul on Wednesday that would increase the retirement age for the country’s youngest citizens, as strikes pressed on throughout the country for the seventh day.

Prime Minister Édouard Philippe said the reforms are necessary to create a "fairer" system that “will be the same for everybody.” The government has said the current complex pension system is unsustainable.

The plan was announced one day after more than 300,000 people protested across the country, causing a logjam of some 285 miles of traffic in Paris. All metro lines except two were closed and many train routes were canceled as unions voiced frustration with French President Emmanuel Macron, whom they accuse of forming policies that favor the wealthy.

Leaving no holds barred, Phillippe said the French “will need to work longer.” He said raising the retirement age from 62 to 64 would only affect those born after 1974. Those born before would get their full pension payout at 62.

The new pension plan would also be based on a universal, points-based system aimed at rewarding employees with points later transferred into benefits.

Phillippe said that public sector workers, such as armed forces, firefighters, police officers and prison guards, would still be entitled to early retirement under the plan.

Phillippe stressed that the plan would encourage people to work longer while putting an end to France’s complex retirement system. France currently has 42 pension schemes across the private and public sectors, with variation in retirement age and benefits.

Unions said the new plan would force employees to work longer for smaller pension allocations. They worried the new plan will remove the most beneficial pensions for a number of jobs.

Phillippe vowed to push the program ahead regardless of protests.

“The government is making fun of everyone,” said Philippe Martinez, the leader of the prominent CGT workers' union. He said the prime minister’s address only “confirms the necessity to step up the strike action.”

Leader of the moderate union CDFT Laurent Berger said a “red line” had been crossed by bringing the age factor into the plan.

Phillippe said the changes would ensure a “fair and sustainable” pension system in the face of a population with a record number of people over 90.

In November, a report commissioned by Phillippe found that under the current system, the country’s pension deficit could be as high as €17.2 billion, or $19 billion, by 2025.

France’s biggest strike in decades, involving as many as 800,000 people across France, has disrupted public transit, closed schools and derailed holiday retail shopping.

On Tuesday, protesters and riot police clashed in Lille and Bordeaux, with officers using tear gas to disperse large crowds.

The Macron administration is hoping to avoid a repeat of 1995 pension strikes that ended with the ousting of Prime Minister Alain Juppe.