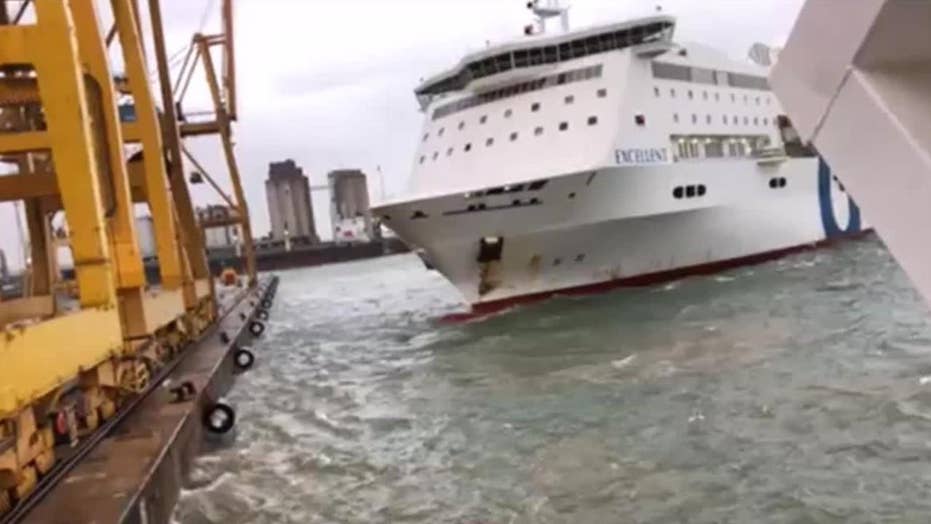 A fire broke out at Barcelona's port after a passenger ferry crashed into a loading crane.

Dock workers in Barcelona's port had to scramble Wednesday after a passenger ferry collided with a loading crane, causing it to collapse and start a large fire.

The incident, which was captured on eyewitness video, shows the ship maneuvering into the port before crashing into a massive crane on the dockside.

Workers at the port in the northeastern Spanish city can be seen running for their lives before the crane falls over, and then sparks a fire.

A Barcelona city spokeswoman told the Associated Press that nobody was injured in the accident, and the city's firefighters announced in a tweet that the fire had been put out hours after the ship crashed.

The spokeswoman, who wasn't authorized to be identified by name in media reports, said a dozen firefighting vehicles and several ambulances had been dispatched to the port. The fire sparked by the collapse engulfed containers that contained hazardous materials.

Grandi Navi Veloci, the Italian company that owns the ferry, said in a statement that strong winds and sea currents prevented the ship from docking, eventually pushing it into the port's crane.

The ferry, which is 650 feet long was carrying passengers and vehicles at the time of the incident. No injuries were reported by those on board, according to the company.