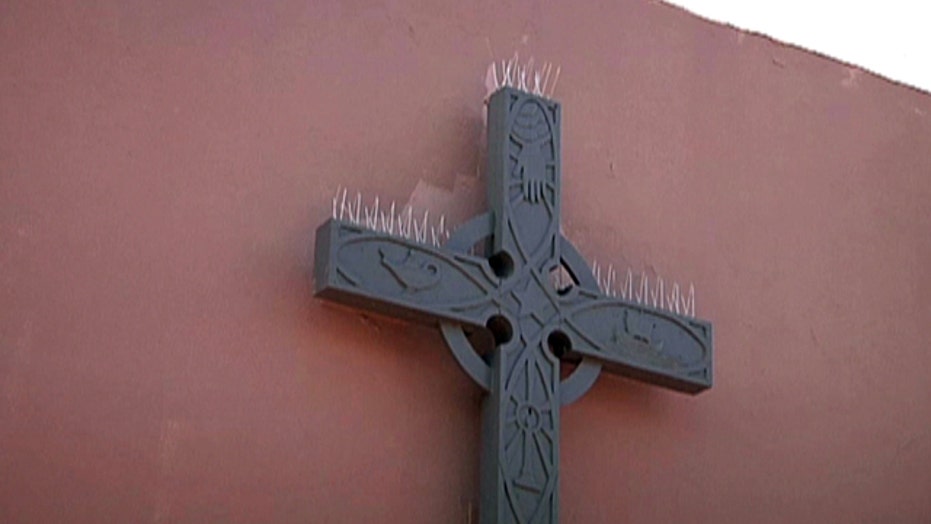 Rosa Imelda Robles Loreto, 41, was detained after a routine traffic revealed she was in the country illegally. The mother of two, who lives in Tucson, received a deportation order requiring her to leave the country by August 8th.

But instead of returning to Mexico, the day before her deportation order she packed her bags and moved into Tucson’s Southside Presbyterian Church, which has become her and her family’s sanctuary of sorts the past three weeks to avoid deportation.

Robles Loreto, who now lives inside the church with her husband and two sons, said she is trying to maintain a normal a life of possible – but hopes to one day return to the home she worked hard to purchase.

But her case has angered some who believe the church is crossing a legal line by protecting those in the country illegally.

“This is just an extension of a non-enforcement policy that prevails,” Dane said. “There’s compassion on one hand, but there’s impact on the other. The church is not above the law.”

For Robles Loreto, she said she’d rather not be confined to the walls of the church – but had no other choice after her request to stay her deportation was denied by Immigration and Customs Enforcement.

“(I want to) get out of the shadow. Breathe a new air. Because I say the air here is different than the air in my house,” she said. “Another motivation for me to get out of here is to leave without fear of being separated.”

Although ICE denied her stay request, the agency says they are not actively pursuing her arrest.

"After conducting a thorough review of Ms. Robles Loreto's immigration case, ICE has decided to exercise prosecutorial discretion by not taking immediate action on (her) removal order," the agency said in a statement.

That does not mean, however, that she is safe from deportation. Any run in with the law, like another routine traffic stop, would send Robles Loreto right back into the custody of Border Patrol.

Another undocumented, Daniel Neyoy Ruiz, 36, also fled to the church after receiving an order of deportation. Like Rosa, he was detained after a routine traffic stop. His first request for a stay was rejected, as well.

After one month confined to the church, ICE granted the father and husband a one-year stay and work permit.

The Rev. Alison Harrington of Southside Presbyterian Church says the church is committed to keeping families together.

“They [undocumented immigrant] are facing a final order of deportation, and they come to us asking if we would surround them with our love to keep their family together… those with families are generally considered lower priority by ICE officials, and those are the people we strive to help stay in this country,” Harrington said.

Rosa, her husband, and her two young sons are all undocumented. The husband and children leave during the day, but Rosa stays.

Rosa, an accountant in Mexico, said gang and drug violence forced her to flee her homeland.

“Mexico is a beautiful country. But there are a lot of drugs, and a lot of violence. There is so much corruption in the country. I have more confidence in the government of the United States than in Mexico,” Robles Loreto told Fox News Latino in Spanish.

She took work as a housekeeper when she arrived to Arizona, and says she will do anything to keep her family united in the country that they love.

“President Obama has two beautiful daughters who have the same hopes as my two sons. And as parents, we fight for the hopes of our children,” Robles Loreto.

Harrington says the boys, ages 8 and 11, will most likely be eligible for Deferred Action for Childhood Arrivals status, which gives a two-year reprieve to undocumented immigrants who illegally entered the U.S. as children.

The reverent said helping the families was a matter of morality.

“We think by elevating their voices and their stories,” Harrington said, “that we will remind people in power of the importance of keeping families together.”