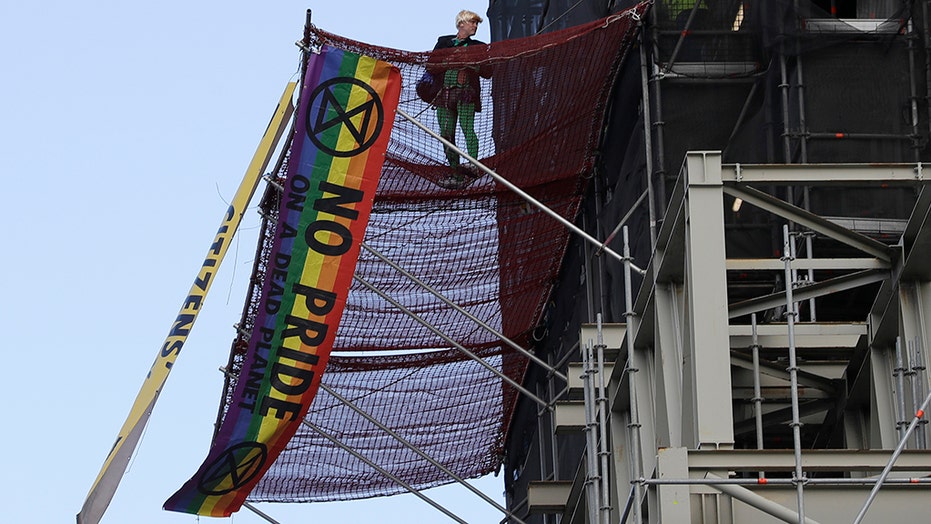 A climate change demonstrator climbed up the scaffolding of London’s Big Ben to drape two banners, calling for citizens to demand action.

The man, identified by Extinction Rebellion as tree surgeon Ben Atkinson, 43, attempted the “free solo climb” of the Elizabeth Tower on Friday to “highlight government inaction on the climate and ecological emergency.”

A climate protester demonstrates with banners on the scaffolding covering the Elizabeth Tower that houses the Big Ben clock in London, Friday, Oct. 18, 2019. (AP)

One of the banners was a rainbow flag with the words “No Pride on a Dead Planet” while the other read: “Citizens Assembly.”

A climate protester demonstrates with banners on the scaffolding covering the Elizabeth Tower that houses the Big Ben clock in London, Friday, Oct. 18, 2019. (AP)

While crowds gathered below to watch the student, police closed the roads near the famous clock tower as they brought in specialists to apprehend Atkinson. He was seen waving to people on the ground.

"We got the declaration of climate emergency Last time. Now perhaps, please Boris, you’re struggling to navigate Brexit let alone work our way out of the sixth mass extinction event. Please. Pretty please.... let’s get on with the citizens assembly," he wrote. "Now you’ve got a chance to do something that could last for centuries. A legacy of being the man that turned it all around. Dare you. Oh, and thanks Greta. I heard you calling."

Extinction Rebellion protesters sought to paralyze parts of London on Friday, building a pyramid blocking off one of the city’s busiest shopping streets.

Protests blocked off the junction of Oxford and Regent Streets and erected bamboo poles into a pyramid shape with a tree branch hanging from the middle of it, Sky News reported.

Police work to remove a protester as hundreds of members of the Extinction Rebellion environmental activist group swarm Oxford circus with three activists erecting a road blocking wooden pyramid structure with an upside down tree hanging in the middle on October 18, 2019 in London, England.  (Getty)

Greg Frey, 23, of London, one of the protesters to lock himself to the base of the structure, told The Guardian that he “would love to go home,” but they have no choice.

“I would love to have not spent the last 13 days on the streets but we have no choice,” he said. We’re trapped.”

Police were forced to use a crane to remove a protester who had climbed to the top of the bamboo structure. The area was cleared hours later.

Police arrest an activist as hundreds of members of the Extinction Rebellion environmental activist group swarm Oxford circus with three activists erecting a road blocking wooden pyramid structure with an upside down tree hanging in the middle on October 18, 2019 in London, England.  (Getty)

“We will raise our red hands and taking responsibility for our actions,” the group’s website said. “We march in admission and recognition of the part we play in the injustice of this emergency, and the ongoing suffering of thousands of people around the world due to climate and ecological breakdown.”

CLIMATE PROTEST IN EUROPE RESULT IN MORE THAN 250 ARRESTS, CRITICISM FROM GERMAN OFFICIAL

According to the Guardian, five activists locked themselves together outside the door of the Kenyan High Commission to highlight the plight of the Sengwer people, who were displaced from their forest homes in the name of conservation.

“Any climate change solution should respect and take into consideration the rights of indigenous peoples around the world,” Laurence Tidy, 26, told the Guardian.

Climate protesters climb on top of train, clash with commuters in London

On Thursday, climate activists who climbed onto the roofs of trains were met with angry London commuters who took it upon themselves to drag them back to platforms.

More than 1,750 people have been arrested and more are likely to come.

The demonstrations come amid tense moments in London as Johnson prepares for a Parliament vote on a newly approved Brexit deal with the European Union.

Johnson returned from an EU summit in Brussels overnight for a busy day of meetings and phone calls as he attempted to persuade lawmakers to ratify the divorce deal at a rare Saturday sitting of Parliament.

He was to brief his Cabinet on Friday afternoon, ahead of what's expected to be a knife-edge vote.

Johnson's Conservative Party holds only 288 seats in the 650-seat House of Commons, so he will have to rely on support from other parties and independent lawmakers to get over the line.