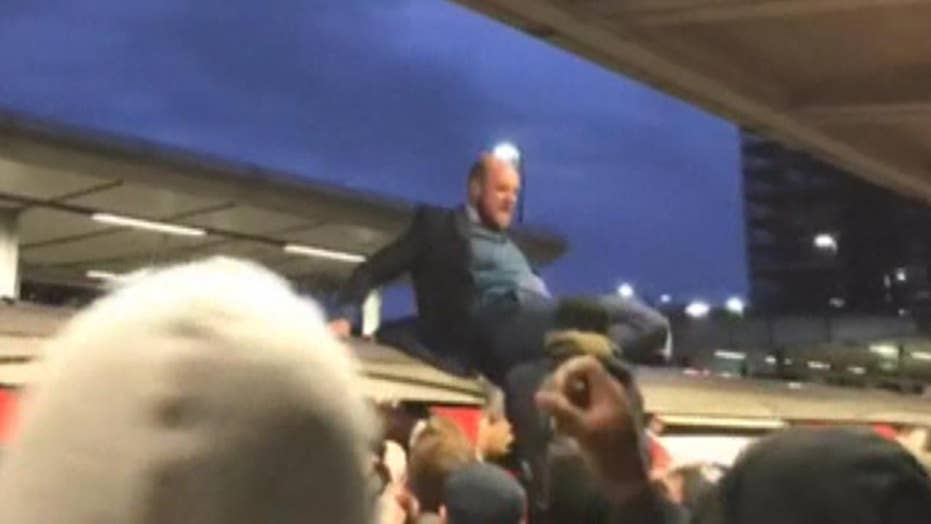 Climate protesters climb on top of train, clash with commuters in London

Climate activists who crippled rush hour across London on Thursday by climbing onto the roofs of trains were met with angry commuters who took it upon themselves to drag some of them back to platforms.

British Transport Police said officers were called to three stations in east London early Thursday after protesters climbed onto the roofs of trains or glued themselves to the carriages.

The demonstrations on Thursday were part of the second week of protests organized by Extinction Rebellion that have previously targeted government buildings, London City Airport, and financial institutions in the British capital.

Robin Boardman, a spokesman for the protesters, said that if such action is necessary to make the government take notice of their climate change demands, "then this is what we must do."

"None of us want to inconvenience ordinary people," he said. "That's why we're doing this in the morning when it will impact business as usual, and not in the evening when people want to get home to be with their loved ones."

Videos have shown protestors using a ladder to climb on top of the roof of one train, sparking an immediate reaction from commuters on the platform. Some tossed food and drinks at protestors, which one person could be heard shouting, "I need to get to work, I have to feed my kids."

Another video showed at least one man reaching up and grabbing the leg of a protester on top of a Tube train, dragging him onto the platform where he was quickly surrounded as he lay on the ground.

Officials told Sky News that four people were arrested at one station after gluing themselves to the doors.

One of the protesters told Reuters he glued himself to a Docklands Light Railway train "for my grandchildren."

CLIMATE PROTESTS IN EUROPE RESULT IN MORE THAN 250 ARRESTS, CRITICISM FROM GERMAN OFFICIAL

Police said they have arrested a total of 8 people and urged protesters not to target London's underground rail network.

London Mayor Sadiq Khan condemned the protesters, saying it was an "unfair burden on our already overstretched police officers."

"This illegal action is extremely dangerous, counterproductive and is causing unacceptable disruption to Londoners who use public transport to get to work," he said.

More than 1,400 people have been arrested since the group began blocking roads, bridges and airports in London over a week ago to demand faster action on climate change. Most have been released without being charged.