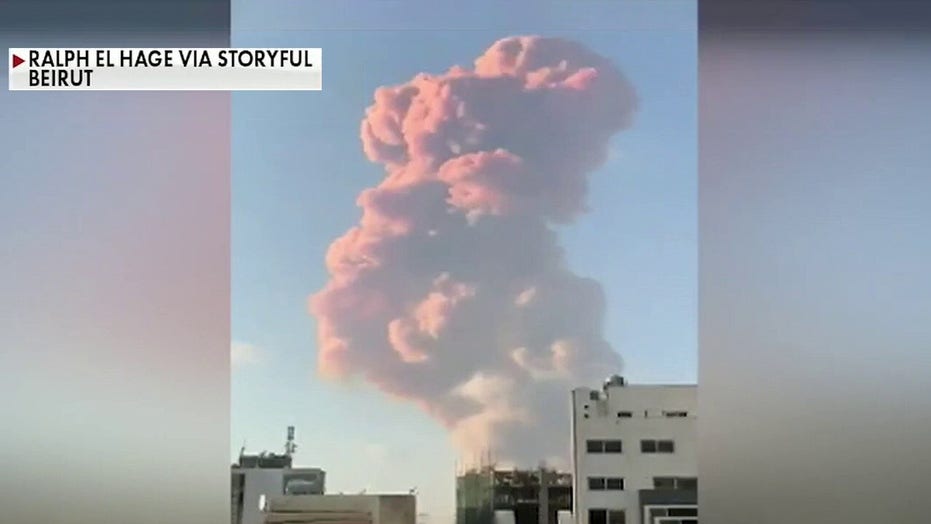 A massive explosion shook Beirut on Tuesday, killing at least 70 people and injuring thousands of others while flattening much of the port, damaging buildings across the capital, and sending a giant mushroom cloud into the sky.

At a press conference later Tuesday, President Trump said U.S. military generals told him that they think the massive explosion was likely a bomb.

"I've bet with some of our great generals and they just seem to feel that this was not some kind of manufacturing explosion type of an event," Trump said. "They seem to think it was an attack. It was a bomb of some kind."

The cause of the explosion remains unclear. The Lebanese Red Cross tweeted that more than 30 teams were responding to the scene of the blast via ambulances.

The health minister said at least 70 people were killed and over 3,000 were injured.

Lebanese Red Cross official Georges Kettaneh said the injured were being taken to hospitals outside the capital because facilities there were at capacity. He put the number of casualties in the hundreds but said he did not have exact figures on dead or injured.

Abbas Ibrahim, chief of Lebanese General Security, said the explosion might have been caused by highly explosive material that was confiscated from a ship some time ago and stored at the port. Local television channel LBC said the material was sodium nitrate. 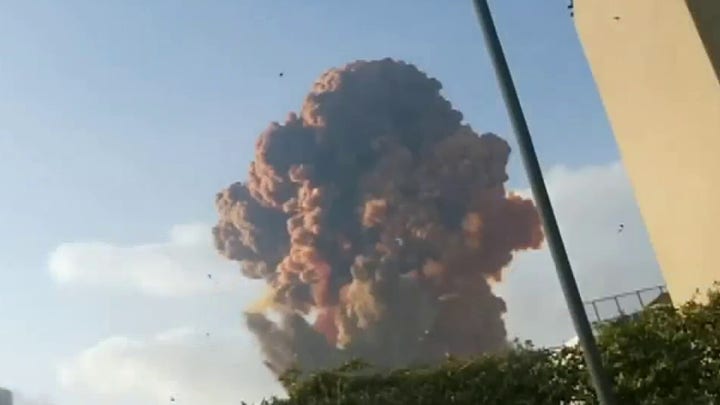 The blast was stunning even for a city that has seen civil war, suicide bombings and bombardment by Israel. It could be heard and felt as far away as Cyprus, more than 180 miles across the Mediterranean.

"It was a real horror show. I haven't seen anything like that since the days of the (civil) war," said Marwan Ramadan, who was about 550 yards from the port and was knocked off his feet by the force of the explosion.

Video taken by residents showed a fire raging at the port, sending up a giant column of smoke, illuminated by flashes of what appear to be fireworks. Local TV stations reported that a fireworks warehouse was involved.

The fire then appeared to catch at a nearby building, triggering a more massive explosion, sending up a mushroom cloud and a shock wave.

Hours after the explosion ambulances were still carrying away the wounded. Officials said the city's hospitals were filled to capacity.

The afternoon blast shook several parts of the capital and thick smoke billowed from the city center. Residents reported windows being blown out, and balconies and ceilings collapsing. The explosion appeared to be centered around Beirut's port and caused wide-scale destruction and shattered windows miles away.

A civil defense official on the scene of the blast said his men had evacuated dozens to hospitals and that there were still bodies inside the port, many of them under debris.

Dozens of ambulances ferried the injured from the port area, where the wounded lay on the ground, Associated Press staff at the scene said. Hospitals were calling for blood donations.

“I saw a fireball and smoke billowing over Beirut. People were screaming and running, bleeding. Balconies were blown off buildings. Glass in high-rise buildings shattered and fell to the street,” one unnamed witness told Reuters.

"We are aware of the explosion and are concerned for the potential loss of life due to such a massive explosion," Capt. Bill Urban, a spokesman for U.S. Central Command, said in a statement to Fox News.

A picture shows the scene of an explosion in Beirut on August 4. (Photo by Anwar Amro/AFP via Getty Images)

The cause of the blast is under investigation but Hezbollah is already in the limelight, multiple intelligence sources told Fox News.

“There are cars with dead people in the streets under rubble, and the medical infrastructure was already at full speed due to the pandemic and lack of supplies,” one source in the region said.

Another source told Fox News that the port was unofficially controlled by Hezbollah, thus pointing out that other adverse players in the region could have played a role.

An Israeli government official said Israel "had nothing to do" with the blast. He spoke on condition of anonymity because he was not authorized to discuss the matter with the media. Israeli officials usually do not comment on "foreign reports."

An Associated Press photographer near the port witnessed people wounded on the ground and widespread destruction in central Beirut. Some local televisions stations reported the blast originated inside an area where firecrackers were stored.

"It was like a nuclear explosion," said Walid Abdo, a 43-year-old school teacher in the neighborhood of Gemayzeh near Beirut.

Charbel Haj, who works at the port, said it started as small explosions like firecrackers, then the huge blast erupted, and he was thrown off his feet.

Miles from the port, balconies were knocked down, windows shattered, streets were covered with glass and bricks and lined with wrecked cars. Motorcyclists picked their way through traffic, carrying the injured.

One woman covered in blood from the waist up walked down a trashed street while talking furiously on her phone. On another street, a woman with a bloodied face looked distraught, staggering through traffic with two friends at her side.

"This country is cursed," a young man passing by muttered.

Outside the St. George University Hospital in Beirut's Achrafieh neighborhood, people with various injuries arrived in ambulances, in cars and on foot. The explosion had caused major damage inside the building and knocked out the electricity at the hospital. Dozens of injured were being treated on the spot on the street outside, on stretchers and wheelchairs.

"This is a catastrophe we have on our hands," said one doctor, speaking on condition of anonymity because he was not authorized to make press statements.

The explosion happened just days before a United Nations tribunal is expected to issue its verdict on four alleged Hezbollah members accused of killing former Lebanon Prime Minister Rafic Hariri in a 2005 car bombing on the Beirut seafront, the BBC reported.

In this frame from video, people walk down the street after an explosion in Beirut, Aug. 4.  (AP)

Some reports said there might have been a second blast Tuesday across the city near the Hariri family residence.

The blast came at a time when Lebanon's economy is facing collapse, hit both by a financial crisis and coronavirus restrictions. Many have lost jobs, while the worth of their savings has evaporated as the currency has plunged in value against the dollar. The result has thrown many into poverty.

It was the latest chapter for a country that has suffered a 15-year civil war, repeated conflict with Israel, political assassinations, and various other crises including the current unprecedented financial and economic crisis.