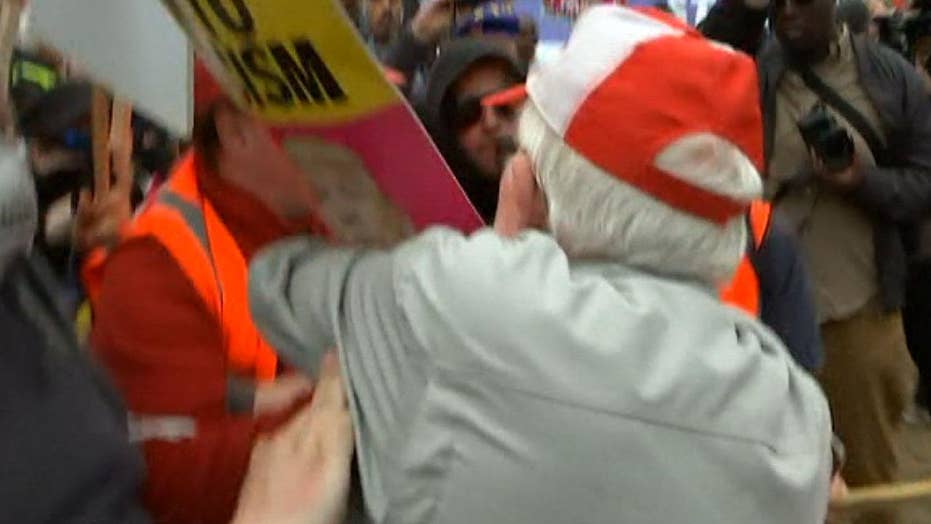 Trump supporter pushed to ground during anti-Trump protest in UK

Raw video: An elderly Trump supporter was pushed to the ground during an anti-Trump protest while the president was visiting the U.K.

Video taken during an anti-Trump protest in central London on Tuesday captured a group of men assaulting and knocking an elderly fan of President Trump to the ground.

The video showed a mob surrounding the man, then pushing him to the ground as they chanted “Donald Trump’s not welcome here,” during the rally in Parliament Square where Britain's left-wing Labour Party leader Jeremy Corbyn gave a speech widely seen as anti-Trump.

In his speech, Corbyn criticized the "hatreds that are being fueled by the far-right in politics in Britain, in Europe and the United States."

The video surfaced after someone at the same protest threw a milkshake at another Trump supporter while he was surrounded by several anti-Trump protesters chanting "Nazi scum," as The Telegraph reported.

The older man, wearing a red and white hat, could be heard in the video saying “get off” as the other men grabbed his jacket and pushed him.

People around the supporter immediately helped him get back up and made sure he was not injured. One woman standing nearby shouted, "If you act like that, you act like Donald Trump, so don't." Others could be heard asking the man if he was alright.

Thousands turned out in London's government district on Tuesday as Trump met outgoing U.K. Prime Minister Theresa May nearby. The group was demonstrating against the president's state visit to the U.K. The protest included a giant blimp depicting the president as an angry orange baby.

The 'Trump Baby' blimp was inflated in Parliament Square in central London as people gathered to demonstrate against the state visit of President Donald Trump on Tuesday. (AP Photo/Matt Dunham)

Demonstrators filled Trafalgar Square and spilled down Whitehall, a street lined with government offices, before marching half a mile to Parliament.

Many paused to take pictures of a robotic likeness of Trump sitting on a golden toilet, reciting catchphrases including "No collusion" and "You are fake news."

Trump largely glossed over the protests, saying he saw "thousands of people in the streets cheering" and waving U.S. and U.K. flags, but just a "very, very small" group of protesters, adding that media reports of a much larger protest were "fake news."

Trump was on a 3-day state visit to the U.K. which started on Monday and ended on Wednesday with commemorations of the 75th anniversary of D-Day.

The president’s trip included a meeting with Queen Elizabeth II, a state dinner at Buckingham Palace and another dinner hosted by President Trump and first lady Melania Trump for Prince Charles and Duchess of Cornwall Camilla Parker Bowles in the official residence of the United States ambassador to the United Kingdom.

Corbyn declined an invitation to Monday's banquet for the president at Buckingham Palace, but requested a meeting with Trump, which the president refused.

"He wanted to meet today or tomorrow and I decided I would not do that," said Trump, calling Corbyn "somewhat of a negative force."