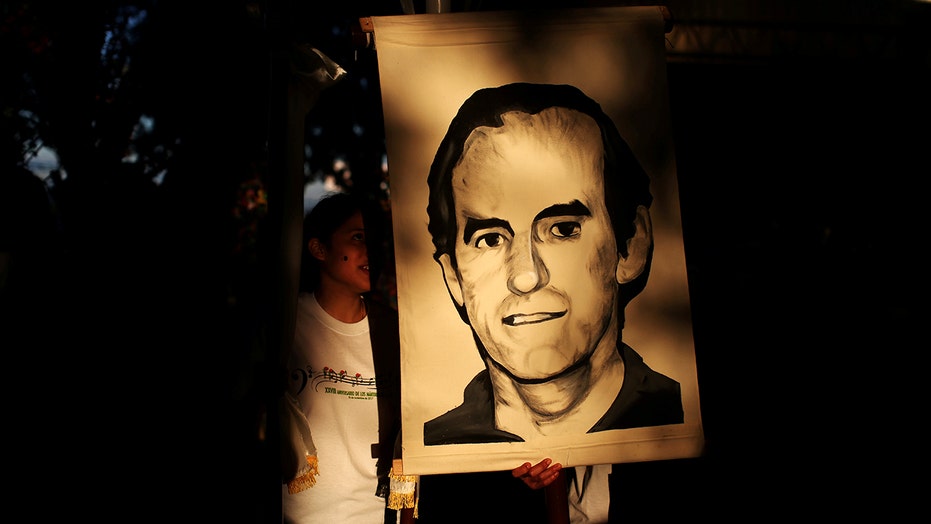 The State Department on Wednesday banned 13 former Salvadoran military officials from entering the U.S. for “gross violation of human rights” committed in November 1989, when six Jesuit priests and two others were murdered on a university campus during the height of the El Salvador civil war.

Secretary of State Mike Pompeo said in a statement that the department has “credible information” that the 13 former military officials, whose ranks ranged from general to private, were involved in planning and executing the extrajudicial killings more than three decades ago. Under the Department of State, Foreign Operations and Related Programs Appropriations Act, Pompeo designated the 13 and their immediate family members “ineligible for entry” into the United States.

Students hold a portrait of Jesuit priest Ignacio Ellacuria prior to a procession commemorating the 28th anniversary of the murder of six Jesuit priests and two employees, at the Central American University (UCA) in San Salvador, El Salvador, on Nov. 11, 2017. REUTERS/Jose Cabezas/File

“The United States condemns all human rights abuses that took place on both sides of the brutal civil war in El Salvador, including those committed by governmental and non-governmental parties,” the statement said. “We value our ongoing working relationship with the Salvadoran Armed Forces but will continue to use all available tools and authorities, as appropriate, to address human rights violations and abuses around the world no matter when they occurred or who perpetrated them. Today’s actions underscore our support for human rights and our commitment to promoting accountability for perpetrators and encouraging reconciliation and a just and lasting peace.”

Pompeo also announced the designation on Twitter, writing that the State Department uses "many tools to promote accountability for abuse committed by all sides and seek justice for victims whenever and wherever abuses occur."

From 1980 to 1992, an estimated 75,000 civilians were killed and another 8,000 disappeared in the brutal civil war between the U.S.-backed Salvadoran army and then-leftist guerrillas called the Farabundo Marti National Liberation Front (FMLN), according to Reuters.

On Nov. 16, 1989, six Jesuit priests, their housekeeper, and her daughter were pulled from their beds at the Central American University in San Salvador and shot to death by uniformed gunmen blocks away from army headquarters.

The Jesuits massacre prompted the U.S. Congress to launch a special investigative task force headed by former Rep. Joseph Moakley, D-Md., which concluded the upper echelon of the Salvadoran officer corps had carried out the extrajudicial killings. The soldiers left a message at the scene in an attempt to make the slayings appear like an attack by the FMLN rebel forces, Vatican News reported. The congressional report’s findings set in motion an international process to end the conflict, according to the U.S. non-profit Center for Justice and Accountability.

FMLN is now a political party in the country. Those whose families suffered human rights abuses during the civil war have long sought justice and reparations. The Salvadoran Supreme Court ruled that an amnesty law was unconstitutional in 2016, but the process for creating new legislation to benefit victims has been delayed, Reuters reported.