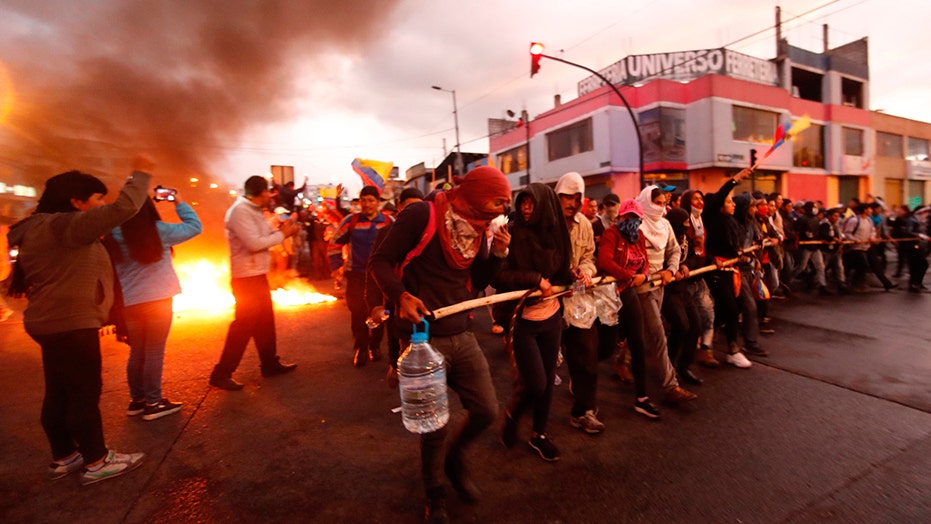 Ecuador’s president is accusing his political rivals of trying to orchestrate a coup this week after violent protests tied to rising fuel prices forced his government to relocate away from the country’s capital.

Officials say about 350 people have been detained so far for blocking traffic, interrupting public services or attacking police following President Lenín Moreno’s decision to end government subsidies that have been keeping fuel prices down. Moreno says the subsidies have cost the government heavily in recent years and dropped them in a bid to stimulate Ecuador’s economy, but scenes coming out of Quito showed protesters throwing stones and marching through the streets in response.

Indigenous anti-government protesters who traveled from their communities arrive on foot to Quito, Ecuador, on Monday. (AP)

“[This] is not a protest of social dissatisfaction faced with a government decision but the looting, vandalism and violence show there is an organized political motive to destabilize the government,” the embattled leader said during a televised address Monday, according to The Guardian.

He went on to accuse political rivals of attempting a coup and joining in on the protests but did not provide any evidence. Moreno also said he moved his government from Quito to Guayaquil for the time being.

Crowds in Quito on Monday broke into the comptroller general’s office and vandalized the National Assembly building in what its Congress described afterward as an “attempt to take over the seat of parliament,” The Guardian reported.

Protesters cover from tear gas behind a banner which says "Out Lenin," during an anti-government protest in Quito, Ecuador, on Monday. (AP)

The protests also resulted in the death of one man who was struck by a car, the newspaper added, citing Ecuador’s government.

Moreno’s announcement last week to end the subsidies doubled the price of diesel overnight and sharply raised gasoline prices. It initially triggered a strike by transport workers that ended a few days later, but clashes involving youths and also members of Ecuador's indigenous communities have kept up pressure on the government.

Soldiers work to remove a boulder place there by protesters to block the Simon Bolivar highway in Quito, Ecuador, on Monday. (AP)

The government says economic paralysis from the street protests is costing the country $70 million a day, a situation that is likely to fuel public dissatisfaction the longer it continues. In addition to the elimination of the subsidies, Moreno has announced labor reforms meant to help stimulate the economy.

The widespread unrest reflects a sense of alienation among many people who were already suffering economic hardship. Economic problems in Ecuador stem from the high public indebtedness Moreno inherited from the 2007-2017 administration of President Rafael Correa.