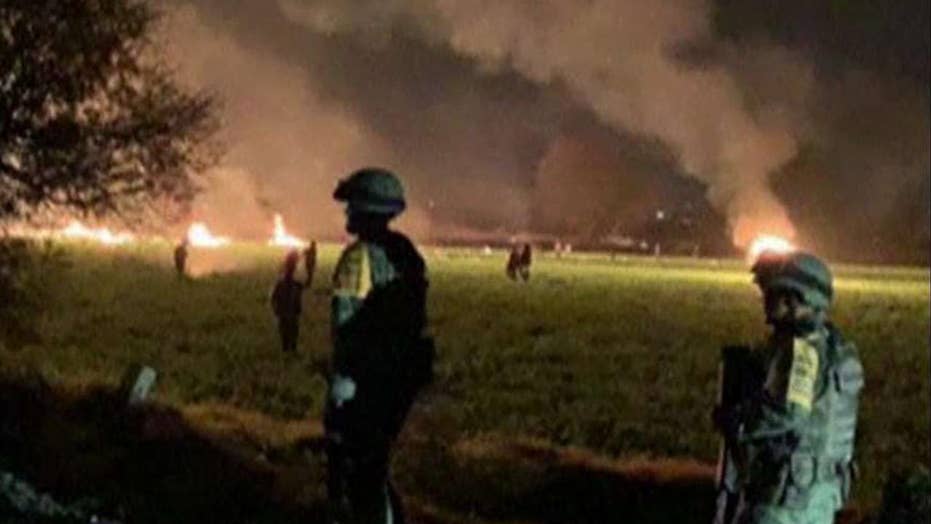 More than 85 other people on Saturday were listed as missing a day after a massive fireball erupted at an illegal pipeline tap in the small town of Tlahuelilpan, about 62 miles north of Mexico City. Fayad said at least 76 others were injured in the blast.

Fuel thieves had drilled into the pipeline, causing the leak in the small town, according to state oil company Petroleos Mexicanos, or Pennex.

MEXICAN POLICE FIND 20 BODIES, MOST BURNED, CLOSE TO US BORDER

Some victims had burns over 40 percent to 90 percent of their bodies, officials told the Los Angeles Times.

Graphic video footage showed flames shooting high into the air against a night sky and the pipeline ablaze. Screaming people ran from the flames, some of them on fire and waving their arms.

The ruptured line burst into flame around 7 p.m., according to authorities, the Times reported. Residents gathered to collect gasoline from the leaking pipeline, the paper reported, citing cell phone images on Mexican media.

The explosion came just three weeks after new Mexican President Andres Manuel Lopez Obrador launched an offensive against fuel theft gangs that drilled dangerous, illegal taps into pipelines an astounding 12,581 times in the first 10 months of 2018, an average of about 42 per day.

“I urge the entire population not to be complicit in fuel theft,” Fayad said on Twitter. “Apart from being illegal, it puts your life and those of your families at risk.”

Municipal health director Jorge Aguilar Lopez said: "What happened here should serve as an example for the whole nation to unite behind the fight that the president is carrying out against this ill."