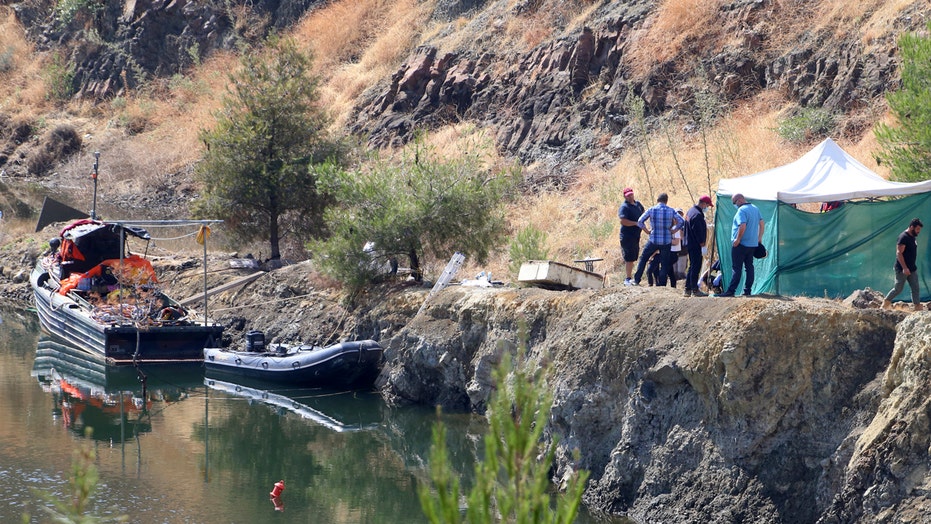 Authorities on the small Mediterranean island nation of Cyprus completed their search for victims of a confessed serial killer when the body of his youngest victim was found at the bottom of a lake.

The probe into an unprecedented spate of killings began back in April when the bound body of Mary Rose Tiburcio, 38, from the Philippines, was discovered by chance down a flooded shaft near a toxic lake that was once part of a now disused copper mine.

An unidentified 35-year-old army captain was arrested in connection with the deaths after investigators found that he had online communications with the first victim, and he subsequently admitted to killing five women and two of their daughters.

Fire Department Chief Marcos Trangolas told The Associated Press that the remains of the girl -- believed to be Tiburcio's 6-year-old Sierra Grace -- were wrapped in a bed sheet and tied by a rope to a cement block and found among reeds 20 feet down the lake.

Divers searching the bottom of a lake in Cyprus discovered the remains of what authorities believe to be the remains of a 6-year-old girl that a serial killer has confessed to killing. (AP Photo/Philippos Christou)

He said divers had searched the exact spot where the 35-year-old suspect pointed to investigators earlier Wednesday while on site.

Police have said they've found no evidence to suggest the suspect has killed anyone else, but investigators are still trying to track down anyone who had been in contact with him online.

The army officer, who is widely acknowledged to be the first serial killer on Cyprus, had been in contact with several of his victims through online chat rooms and has made written confessions to the killings, according to Sky News.

Cyprus police personnel carry a stretcher containing what is believed to be remains of a 6-year-old girl, near the village of Xiliatos, Cyprus, Wednesday, June 12, 2019. (AP Photo/Philippos Christou)

The suspect is due to appear in court Friday and has remained in custody pending the completion of work by investigators.

The killings took place over 2 1/2 years starting in September 2016 with the disappearance of 36-year-old Romanian Livia Florentina Bunea, and her 8-year-old daughter Elena Natalia. Their bodies were found inside suitcases at the bottom of the toxic lake.

Another body, believed to belong to Ahita Khadka Bista from Nepal, was found down a dry well in a military firing range.

Police officials stand next to a tent where divers brought what is believed to be remains of a 6-year-old girl, near the village of Xiliatos, Cyprus, Wednesday, June 12, 2019. (AP Photo/Philippos Christou)

Tiburcio's body was discovered on April 14 and triggered the investigation that led to the uncovering of the serial killings. The body of Arian Palanas Lozano, 28, also from the Philippines, was found down the same shaft six days later.

The killings have rocked the island nation and fueled public outcry for failings by authorities to properly look for the victims who were initially reported missing.

The country's police chief was sacked and the justice minister resigned over allegations they did not take the disappearances seriously, as the women were from overseas.

Bunea and her daughter will be buried Thursday in a village outside the capital Nicosia. The Cyprus government has said it will cover the funeral and burial expenses of all the victims.