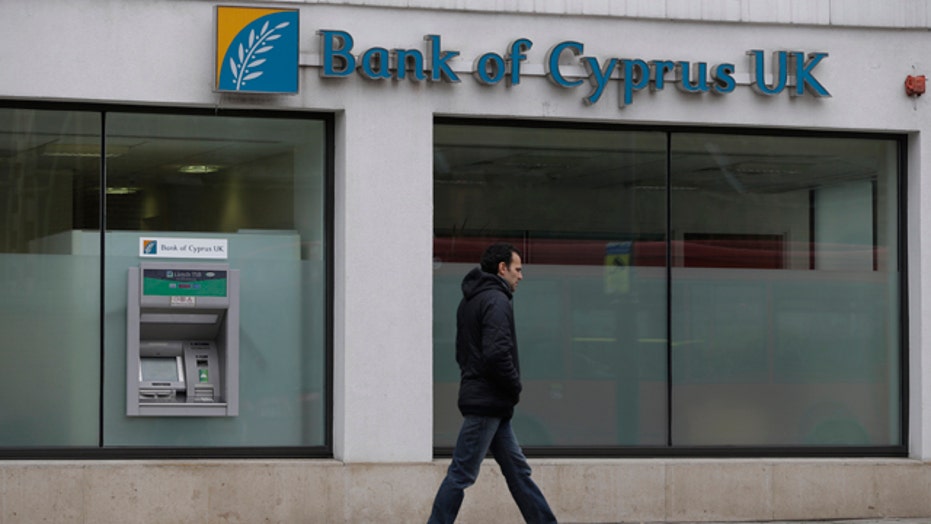 NICOSIA, Cyprus – Cypriot businesses were under increasing strain to keep running on Tuesday after financial authorities stretched the country's bank closure into a second week in a harried attempt to stop depositors from rushing to drain their accounts.

"Temporary" restrictions will be imposed on financial transactions once the banks do open, he said, but he would not specify what they would be or how long they would be in place.

"We have to restore the public's trust in banks," he said.

Finance Minister Michalis Sarris told The Associated Press the restrictions would help stem any mass deposit withdrawal that is "bound to happen" and that they would be removed in a "relatively short period of time."

"I think every day (banks) are not open creates more uncertainty and more difficulties for people, so we would like to do our utmost to make sure that this new goal that we have set will work," he said.

All but two of the country's largest lenders had been due to reopen Tuesday, after being shut since March 16 to stop savers from withdrawing all their money while politicians figured out how to raise the funds necessary for Cyprus to qualify for an international bailout.

However, late Monday, authorities announced that the bank closures would be extended until Thursday, giving officials more time to initiate a major overhaul of the banking sector and devise capital controls to limit the amount of money that can be taken out of accounts.

"We have to all understand that we live in very critical times. Officials of the government and the Central Bank are working day and night," Demetriades said.

"We are looking to a much smaller banking system over time and more concentrated on its core business, which is Cyprus and the international business units in Cyprus," he said.

Cyprus needed to raise 5.8 billion euros before international lenders were willing to give it the 10 billion euros. Much of the 5.8 billion euros will be raised by forcing losses on accounts of more than 100,000 euros ($129,000), in the country's second-largest lender, Laiki, with the remainder coming from tax increases and privatizations.

The bank will be broken up immediately into a so-called bad bank containing its uninsured deposits and toxic assets. The "good" assets will be transferred to the nation's biggest lender, Bank of Cyprus.

Deposits at Bank of Cyprus above 100,000 euros will be frozen until it becomes clear to what extent they will also be forced to take losses. Those funds will eventually be converted into bank shares.

"It is a painful development, no doubt about that...it doesn't matter how rich you are, how many millions you have, you don't like your deposits, which you assume were safe, to be converted into shares," said Sarris, adding that authorities are confident that those shares will eventually gain in value.

Sarris said Cyprus' economy will shift from one centered on financial services.

Nonetheless, businesses have already been feeling the brunt of the cash crunch, unable to pay salaries and suppliers. Cypriots have slashed spending during the uncertainty.

The banks' closure has been felt in the country's important shipping industry, which contributes about 5 percent or 800 million euros ($1 billion) to the economy. Cyprus ranks 10th in the world in terms of the number of ocean-going vessels flying its flag, and it is in the top five countries with the largest number of ship management companies.

"This is destructive for us," said an official with Cyprus-based shipping company EDT Offshore, who spoke on condition of anonymity because his company did not authorize him to speak to the media.

"We have to pay our crews' salaries and that's $500,000, while we have to pay as much for our office staff by March 28 and we don't have access to our bank accounts," he said. "These are people who need to pay their bills, have obligations to meet."

Authorities in the Greek port of Piraeus have prevented one of three EDT ships from leaving until the company pays it port dues. That means the ship can't fulfill its contract with clients, meaning possible losses for the company, which has a fleet of 18 vessels.

Fitch credit rating agency warned Tuesday that it may downgrade Cyprus further into "junk" status amid concerns that the shock from the banking sector's "systemic failure" heightens the risk to public finances.

Also Tuesday, the chairman of the board of Bank of Cyprus, Andreas Artemis, and four other board members tendered their resignations, a statement from the bank said. The board did not accept the resignations, which will become valid only if not withdrawn in a week's time.

Meanwhile, Britain flew in some 13 million euros over the weekend to pay about 3,000 British civilian and military personnel serving at the two military bases that it retained after its former colony Cyprus gained independence.

The Ministry of Defense last week flew in 1 million euros in cash in case automatic teller machines on Cyprus shut down.