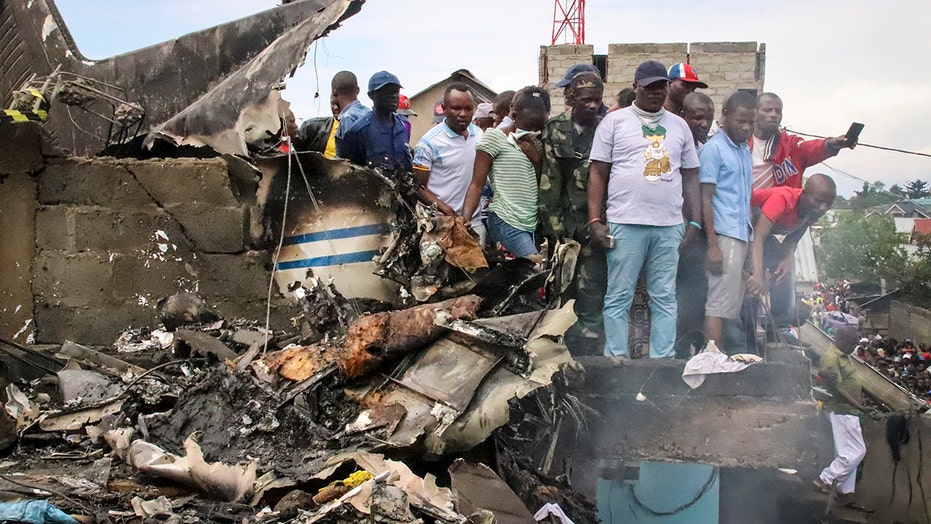 A plane carrying at least 17 passengers crashed into homes shortly after takeoff Sunday in eastern Democratic Republic of Congo, killing at least 25, including people on the ground, authorities said.

The National Border Health program confirmed the fatalities in a statement and said that there were two survivors, including one member of the crew. The survivors were being treated at a hospital.

Rescuers and onlookers gather amidst the debris of an aircraft that crashed in Goma, Congo on Sunday. (AP Photo/Justin Kabumba)

The provincial government said in a statement that preliminary information indicated the plane carried 17 passengers when it failed to take off. It was unclear how many crew members were aboard.

While the exact number of dead has not been confirmed, it is believed that victims included residents on the ground, including a family of four, local officials told the BBC.

Images from the scene showed black smoke rising from the charred wreckage of the aircraft as residents gathered around the destroyed homes.

Rescuers were seen digging through the debris and removing bodies as they searched for survivors. Residents of the neighborhood packed the narrow streets and looked on.

AUSTRALIAN TOURIST, 35, TIED UP AND BEATEN BY INDIAN MOB HAD ALLEGEDLY 'MISBEHAVED' AROUND VILLAGE WOMEN

Kanyere said investigators are "looking for and collecting all of the necessary information" to identify the victims.

Rescuers remove bodies from the debris of an aircraft that crashed into two residential homes. (AP Photo/Justin Kabumba)

The aircraft was owned by private carrier Busy Bee and was headed to Beni, about 220 miles north of Goma in the same province.

While the cause of the crash has not been confirmed, the plane may have experienced engine failure about a minute after takeoff, the BBC reported, citing sources.

Air accidents are frequent in the Congo because of poor maintenance and relaxed air safety standards. None of Congo’s commercial carriers, including Busy Bee, are allowed to fly into European Union airspace because of safety concerns.