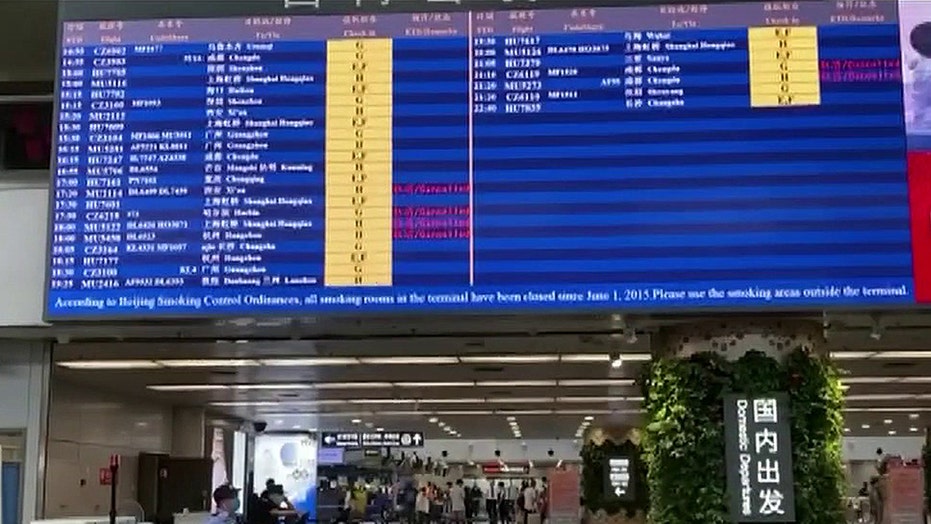 Beijing slashes commercial flights, issues lockdown orders in a race to contain a new flare-up of COVID-19; Benjamin Hall has the details.

China is claiming Thursday that a new coronavirus outbreak in Beijing is now under control despite officials announcing further sweeping restrictions to contain its spread.

Beijing is reporting 21 additional infections Thursday, down from 31 on Wednesday. Authorities have confirmed 158 new coronavirus cases in Beijing over the past week, most if not all of which have been linked to the city’s largest wholesale food market, where thousands of people work.

Wu Zunyou from the Chinese Center for Disease Control and Prevention told a news conference Thursday that such outbreaks are inevitable and this one was larger than expected because it happened in a major market.

People wait in line at a COVID-19 testing site in Beijing on Wednesday after they were ordered by the government to be tested after potentially being exposed to the coronavirus at a wholesale food market. (AP)

Wu said workers in the seafood section were infected first and in greater numbers than those in the meat and vegetable sections.

Subsequent tests for the coronavirus in food imports, conducted across the country following the market outbreak, were all negative, a customs administration notice added.

However, Beijing is continuing to press strict measures to contain the outbreak.

CHINA CLOSING SCHOOLS, COLLEGES IN BEIJING AGAIN BECAUSE OF CORONAVIRUS

Security guards prepare for duty near a neighborhood under lockdown in Beijing on Tuesday. (AP)

All indoor public venues, including clubhouses and party rooms in apartment complexes, will remain closed, city government official Zhang Ge said, according to the Associated Press. Offices, restaurants, and hotels in a high-risk area will be shut down, he added, while flights at the city’s two airports have already been cut by half.

A city transport spokesman said at the news conference that bus service between Beijing and other provinces also would be suspended starting Friday.

Chinese state media had announced Wednesday that all schools and colleges there would be shuttered again because of the outbreak. And over the weekend, 11 residential communities had been placed on lockdown.

Anyone who has been near the market since May 30, along with their close contacts, will be quarantined at home for 14 days and tested at least twice, Zhang says.