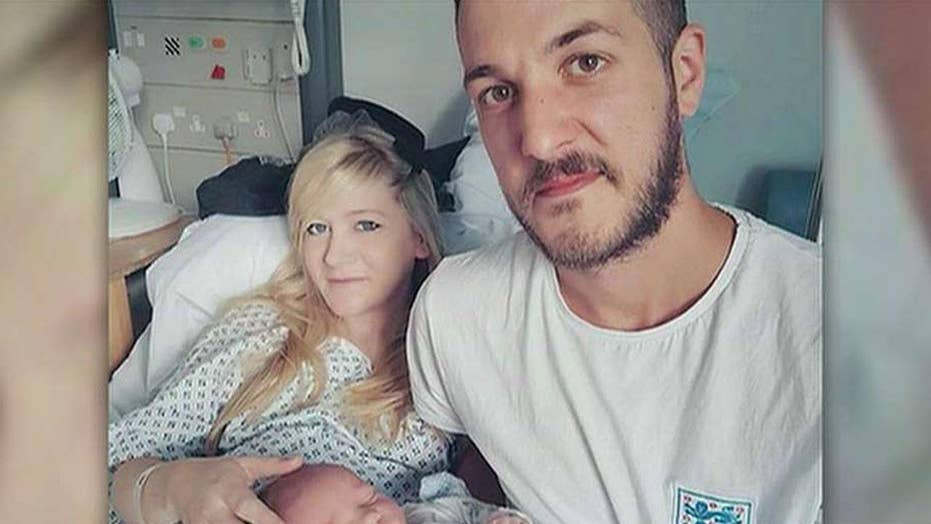 British Prime Minister Theresa May left the door open for the terminally ill infant Charlie Gard to receive treatment outside the United Kingdom, as the Vatican and hospitals in the U.S. offered to care for the baby.

May told the House of Commons Wednesday that she understands that the 11-month-old’s parents are in an “unimaginable situation” and are trying to do what’s right for their child, but that in cases like this doctors are forced to make “heartbreaking decisions.”

She said earlier in the week, “I am confident that Great Ormond Street Hospital have and always will consider any offers or new information that has come forward with consideration of the well-being of a desperate ill child.”

This is an undated hand out photo of Charlie Gard provided by his family, at Great Ormond Street Hospital, in London. The parents of a terminally-ill baby boy lost the final stage of their legal battle on Tuesday, June27, 2017 to take him out of a British hospital to receive treatment in the U.S., after a European court agreed with previous rulings that the baby should be taken off life support. (Family of Charlie Gard via AP)

TRUMP ENTERS CHARLIE GARD DEBATE: 'WE WOULD BE DELIGHTED' TO HELP

Charlie Gard is suffering from a rare genetic condition that has damaged his brain and left him unable to breathe without assistance. His parents have said they want to take him to the U.S. for an experimental medical treatment they believe may prolong his life.

The Guardian reported that an unnamed hospital in the U.S. has offered to treat Charlie free of charge.

However, a succession of judges backed specialists at Great Ormond Street Hospital in London who've said the therapy won’t help Charlie and may cause him to suffer.

President Donald Trump and Pope Francis brought international attention to the family’s legal battle this week by commenting on a case that pits the rights of parents to decide what’s best for their children against the responsibility of authorities to make sure children receive the most appropriate care.

“If we can help little #CharlieGard, as per our friends in the U.K. and the Pope, we would be delighted to do so,” Trump tweeted earlier this week.

Helen Aguirre Ferré, the director of media affairs at the White House, told reporters earlier this week: “Upon learning of baby Charlie Gard’s situation, President Trump has offered to help the family in this heartbreaking situation.

Chris Gard and Connie Yates, who are battling to take their baby Charlie to the US for treatment against advice from doctors that he should be taken off life support arrive at The High Court in London, Britain April 5, 2017. REUTERS/Eddie Keogh - RTX347VA

Pope Francis also issued a statement saying the parents' rights to treat their son "until the end" should be respected.

Vatican Secretary of State Cardinal Pietro Parolin has said the Holy See will do everything it can to overcome legal obstacles to bringing Charlie to Bambino Gesu for treatment.

"Overcome these problems? If we can do it, we will do it," Parolin said.

March for Life, which organizes the biggest pro-life demonstration in the U.S., launched a campaign Thursday to save Charlie's life. The group is rallying to have the hospital release the child back to his parents to look for other medical treatment.

"Every life is a gift and worth fighting for," March for Life president Jeanne Mancini said. "We plan to do everything in our power to be a voice and to protect the inherent dignity of little Charlie Gard."

The campaign includes the hashtags #LetCharlieLive and #CharlieGard.

Gard, born in August 2016, was diagnosed with infantile-onset encephalomyopathic mitochondrial DNA depletion syndrome, which results in the boy’s brain, muscle and breathing ability being “severely affected,” congenital deafness and severe epilepsy, according to a professor who testified in front of the U.K. High Court that decided the case.

More than $1.68 million has been raised to help the infant travel to the U.S. for treatment. The life support he is receiving at the London hospital soon will be turned off over the objections of his parents.

"The foreign secretary said this was a deeply tragic and complex case for all involved, and said it was right that decisions continued to be led by expert medical opinion, supported by the courts, in line with Charlie's best interests," Johnson's spokesman said in a statement.

Fox News' Cody Derespina and The Associated Press contributed to this report.