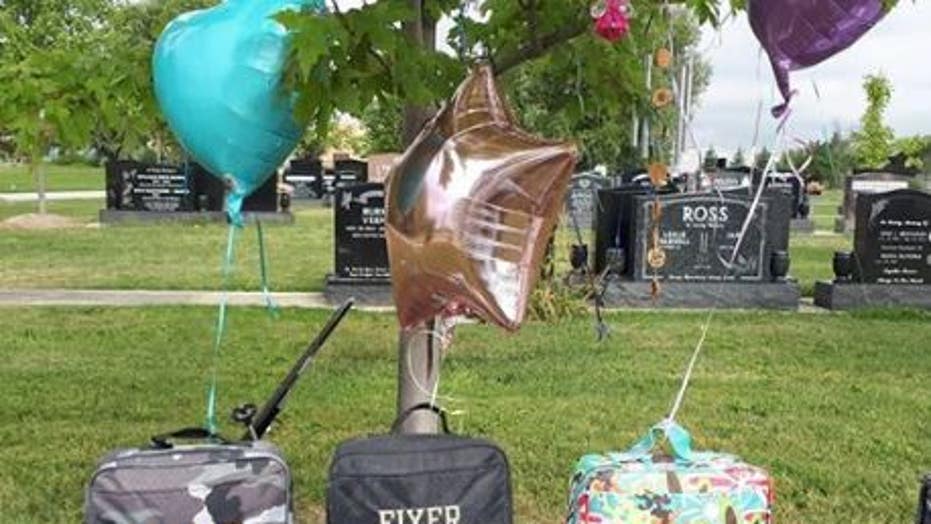 A Canadian mother whose three children were killed by a drunk driver shared a picture online of their lunch boxes to raise awareness.

Jennifer Neville-Lake of Bampton, Ontario, posted the heartbreaking photo on her Facebook earlier this month, which would have been the time her children started a new school year.

The image shows her childrens’ lunch boxes above a grave marked: “Forever In Our Hearts.”

A Canadian mother says she’s shared this photo to raise awareness about the impact of drunk driving. (Jennifer Neville-Lake)

Neville-Lake said her kids had been visiting her parents who were due to drive them back in her van. When they were running late, “I was getting annoyed,” she told ABC News.

“But when 5 o’clock hit I was like, ‘this is really late for them.’ I tried calling their phones and they didn’t answer me,” she said. “I flipped on the news and saw the crash and said, ‘That’s my van.’”

All three children and Neville-Lake’s father died from their injuries. Her mother, Neriza Neville survived.

The drunk driver was later identified as Marco Muzzo. Police said his blood-alcohol level was found to be nearly three times the legal limit, CBC reported. He pleaded guilty one year later and was sentenced to 10 years in prison.

Neville-Lake told Orlando’s Fox 35 she wanted to share the Facebook photo in hopes of making a difference.

“I share it to raise awareness of the consequences of impaired driving in the hopes that no one else has to hold all their children’s birth certificates in their hands for their 40th birthday like I did this year,” she said.