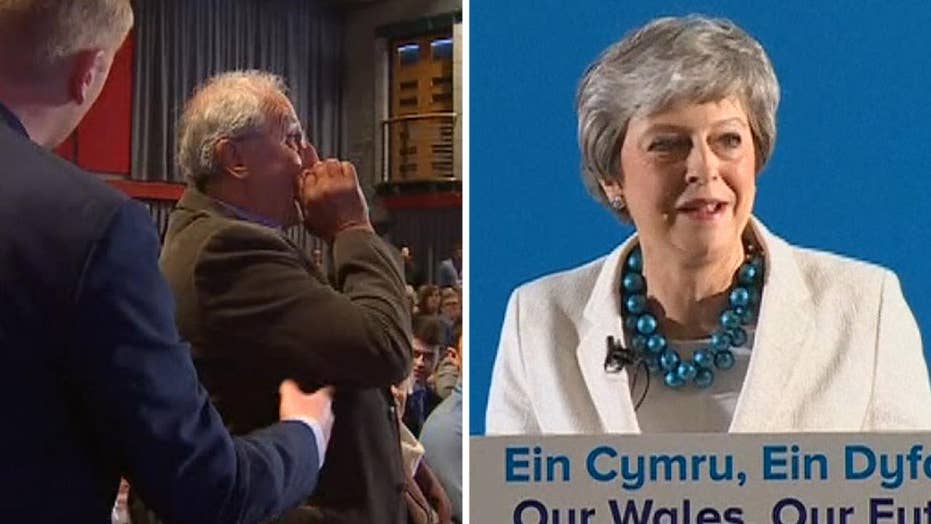 'We don't want you': Man heckles British Prime Minister Theresa May during speech in Wales

Talks between the U.K. government and opposition Labour Party MPs on how to resolve Brexit broke down on Friday -- almost certainly dooming Prime Minister Theresa May’s withdrawal agreement, and her hopes of staying on as prime minister beyond June.

The cross-party talks between May’s Conservative Party lawmakers and socialist firebrand Jeremy Corbyn’s Labour always seemed a long shot, but May resorted to opening the talks after Parliament overwhelmingly rejected the agreement she thrashed out last year with European leaders on three separate occasions.

But on Friday, Corbyn pulled out, saying “it has become clear that, while there are some areas where compromise has been possible, we have been unable to bridge important policy gaps between us.”

“Even more crucially, the increasing weakness and instability of your government means there cannot be confidence in securing whatever might be agreed between us,” he said, in a letter reported by The Daily Telegraph.

May said on a campaign stop Friday that “in particular we haven’t been able to overcome the fact that there isn't a common position in Labour about whether they want to deliver Brexit or hold a second referendum which could reverse it.”

May’s deal has faced opposition from those who wish Britain was remaining in the E.U. and want a second referendum, as well as those on the right of her party who believes that it leaves Britain handcuffed to the bloc. She has also faced increasing anger over the decision to delay Britain’s departure from March to as late as October.

Downing Street has said it will seek a fourth vote on the deal in early June, in the same week as President Trump visits the country to mark the 75th anniversary of D-Day. But with talks having broken down, the chances of her making up the deficit of support from her own party with Labour backing now seems almost impossible. In his letter, Corbyn said that "without significant changes, we will continue to oppose the Government’s deal as we do not believe it safeguards jobs, living standards and manufacturing industry in Britain."

Labour Party leader Jeremy Corbyn said that "we have been unable to bridge important policy gaps between us.” (AP Photo/Frank Augstein, file)

Should the agreement be torpedoed by the House of Commons for the fourth time, it will only increase the already thunderous calls for May to resign -- even though she is technically protected from being ousted until December.

May met with her party’s 1922 Committee on Thursday, where Chairman Graham Brady described talks as “frank” and that they had agreed that they would meet again after the vote to agree on a timetable for her departure from Number 10.

The Tories are bracing for a drubbing in next week’s European elections, where polls have shown their right-wing base could defect en masse to the newly formed Brexit Party.

The Brexit Party, led by former U.K. Independence Party leader and Fox News contributor Nigel Farage, is predicted to come first on election day, while the Tories are tipped to come as low as fifth.

Meanwhile, those seeking to replace May in 10 Downing Street and already positioning themselves for a summer leadership race. Former Foreign Secretary Boris Johnson, who campaigned for Brexit and resigned last year over May’s handling of negotiations, said on Thursday that he would be a candidate when May steps down.