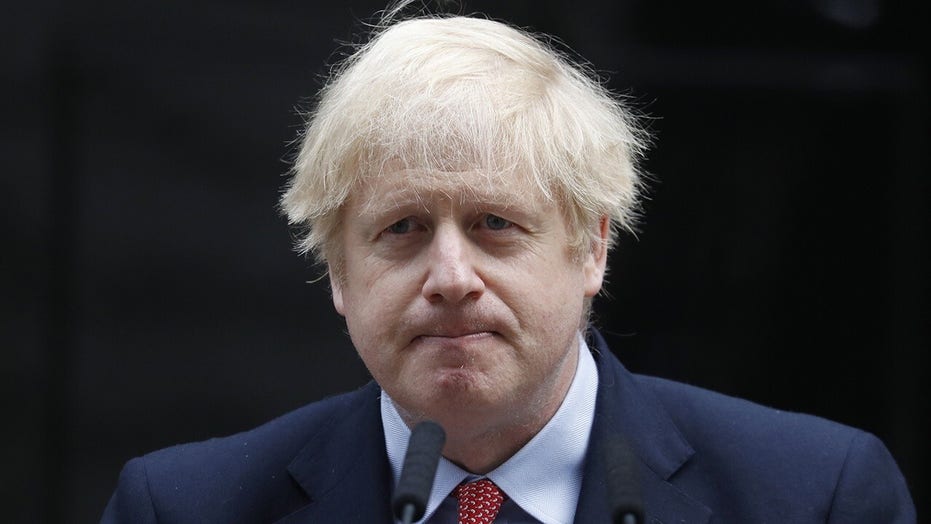 British Prime Minister Boris Johnson is back at work Monday after recovering from the coronavirus, telling his country’s residents that “the end of the first phase of this conflict” is near, but the lockdowns aren’t going away anytime soon.

Johnson made the comments outside his 10 Downing Street office after being sidelined for three weeks while battling COVID-19. He said Britain had reached the moment of “maximum risk” in its outbreak – yet current coronavirus prevention measures are likely to be extended beyond May 7.

“I refuse to throw away all the effort and the sacrifice of the British people and to risk a second major outbreak and huge loss of life and the overwhelming of the [health system],” Johnson added.

British Prime Minister Boris Johnson makes a statement on his first day back at work in Downing Street, London, on Monday after recovering from a bout with the coronavirus that put him in intensive care. (AP)

The 55-year-old leader appeared thinner but better-rested than when he was last seen in public earlier this month.

The United Kingdom, as of Monday, has 154,037 confirmed coronavirus cases and 20,795 deaths, according to statistics from Johns Hopkins University.

Despite the death toll, Johnson’s government is under mounting pressure to set out a blueprint for easing the lockdown that has sharply curtailed business and daily life since March 23.

More than 1.5 million Britons have applied for welfare benefits in the past month, and the government’s economic watchdog says the economy could shrink by 35 percent by June 1.

In signs of lockdown fatigue, the volume of road traffic has begun to creep up, and businesses including construction sites and home-supply stores have begun to reopen after introducing social distancing measures.

As other European countries begin to slowly reopen businesses and schools, Johnson said he shared Britons' impatience to get back to normality. But he said, “we simply cannot spell out now how fast or slow or even when those changes will be made.”

Johnson indicated that any loosening of the lockdown would happen in stages, as authorities “begin gradually to refine the economic and social restrictions and one by one to fire up the engines of this vast U.K. economy.”

Johnson spent a week in St. Thomas’ Hospital in London earlier this month, including three nights in intensive care. When he was discharged on April 13, he thanked medical workers at the hospital for saving his life, saying his condition “could have gone either way.”

During his absence, Johnson’s government faced criticism over shortages of protective equipment for medical workers and a lack of testing for the virus. It promised to conduct 100,000 coronavirus tests a day by the end of April but has yet to reach even 30,000 a day.