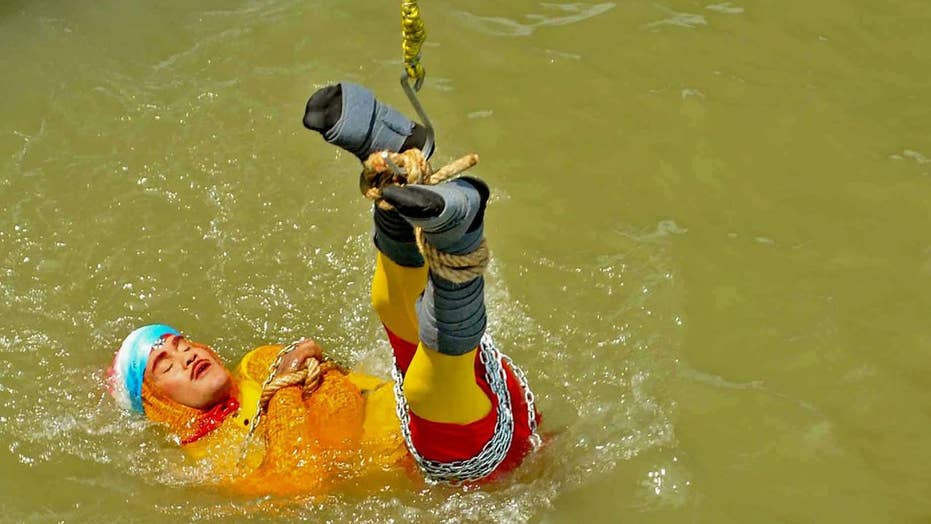 A magician has been found dead in India's River Ganges after a chains escape stunt went horribly wrong.

A magician has been found dead in India's River Ganges after a chains escape stunt went horribly wrong.

A crane lowered 'Wizard Mandrake', born Chanchal Lahiri, into the river at Kolkata, while the Indian star's loved ones, fans, reporters and police watched from the river banks on Sunday.

But the tightly-shackled 40-year-old failed to emerge from the water after being released into the current from a metal hook in a bid to recreate a Houdini trick.

Rescue workers discovered his body on Monday evening after a frantic 24-hour search.

In this photo taken on June 16, 2019 Indian stuntman Chanchal Lahiri, known by his stage name "Jadugar Mandrake", is lowered into the Ganges river, while tied up with steel chains and ropes, in Kolkata.  (AFP/Getty)

The tragic news was confirmed by deputy commissioner of the port division of Kolkata police, Syed Waquar Raza.

Before Lahiri entered the river he reportedly said it would be "magic" if he freed himself, but "tragic" if he couldn't.

The magician last successfully pulled off a similar stunt 21 years ago in the same river.

He was locked inside a bulletproof glass box and tied with a chain.