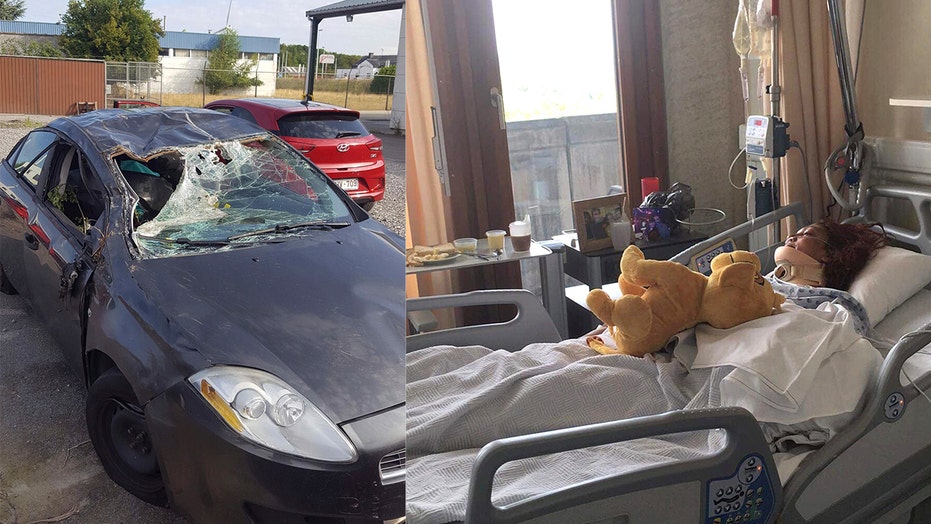 A Belgian woman who disappeared for nearly a week was found alive after she was trapped in her car for six days during last week’s heatwave in Europe.

Corine Bastide, 45, disappeared near Liège, Belgium on July 23 after her vehicle swerved into a ditch; she injured her spine and was rendered helpless.

After enduring temperatures in triple digits, she was finally found by family friends six days later when they spotted the vehicle.

From her hospital bed in Liège, Bastide told Belgian news broadcaster RBTF that she feared she would have been left in the “terrifying heat.”

She said during the first night, her phone rang constantly, but she was unable to reach it.

"The next day the telephone stopped ringing. I knew the battery had run out. I tried screaming when I heard people, but apparently no one could hear me," she said.

Corine Bastide, 45, disappeared near Liège, Belgium on July 23 after her vehicle swerved into a ditch in an isolated location; she injured her spine and was rendered her helpless. The crashed happened just two days before temperatures hit 107 degrees Fahrenheit. (AP)

Every time Bastide moved her arms to try to escape, she would lose consciousness. Eventually, after mustering enough strength, she managed to use her foot to open the car door.

“The most difficult thing was lying on pieces of glass,” she said. “I tried to hoist myself up but I had the impression that my back was being torn.”

Without food or drink in the vehicle, Bastide survived by drinking rainwater in an empty chewing gum box. She claims she also used a wet branch to create the sensation of moisture in her mouth.

In this undated photo taken by her son, the automobile of Marie Corine Bastide is parked in a lot in Liège, Belgium. Bastide, who was involved in a car accident on the night of July 23, 2019, during one of Belgium's record-breaking heat waves, survived for six days in her wrecked car in a ditch before being rescued. (Hadrien Riga via AP)

Days later, a car stopped at her location where she swerved off the road – Bastide cried out for help and a woman who had joined a public search for her, immediately called authorities.

“She told me she had been looking for me everywhere,” said Bastide. “She stayed with me all the time and that woman, I think she is my guardian angel.”

Bastide said she is lucky to be alive after the terrifying six days but added that she never lost hope.

"I thought I would never get out," she told RTBF. "But I wanted to live for my children. I didn't want them to think I had done something stupid, like kill myself. No, it was an accident."

Ms. Bastide’s son said his mother will have to undergo surgery and spend the next several weeks in the hospital recovering.