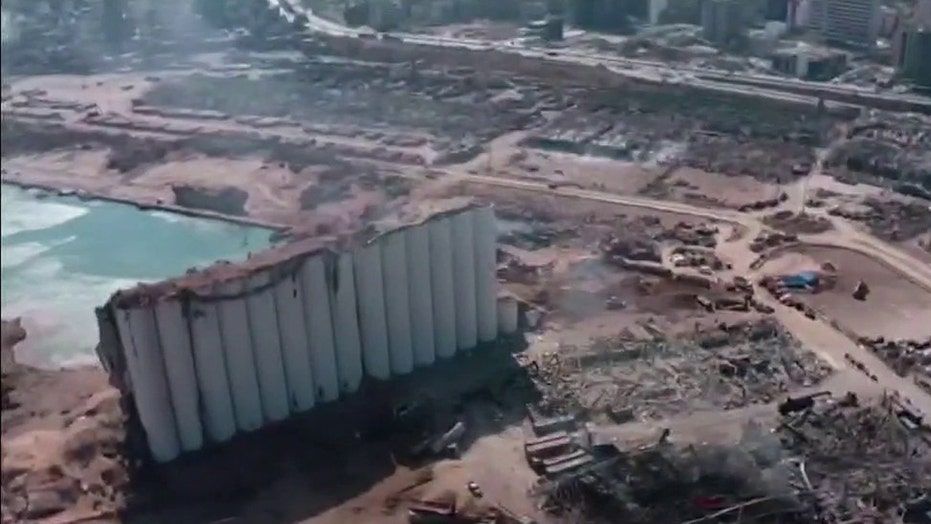 As outraged protesters gathered in central Beirut on Thursday, French President Emmanuel Macron assured that foreign aid dollars would not fall into corrupt hands on the second day since a massive explosion devastated the Lebanese capital, leaving so far at least 157 dead and 5,000 injured.

"I guarantee you this - aid will not go to corrupt hands," Macron, the first world leader to visit the city since Tuesday’s blast, told a crowd calling for an end to the Lebanese “regime,” according to Al Jazeera. “I will talk to all political forces to ask them for a new pact. I am here today to propose a new political pact to them."

Public anger mounted against the Lebanese ruling elite that is being blamed for the chronic mismanagement and carelessness that led to the disaster. The port and customs office is notorious for being one of the most corrupt and lucrative institutions in Lebanon where various factions and politicians, including Hezbollah, hold sway.

Citizens ride their scooters and motorcycles pass in front of a house that was destroyed in Tuesday's massive explosion in the seaport of Beirut, Lebanon, Wednesday, Aug. 5, 2020. (AP Photo/Hussein Malla)

Badri Daher, director-general of Lebanese customs, told local media on Wednesday that his office sent six letters to the country’s judiciary over the years expressing concern over the ammonium nitrate stored at the port since it was confiscated from a ship in 2013. He had been asking whether he should export the cargo, sell it or hand it over to the Army.

The Moldovan-flagged ship, the Rhosus, entered the Port of Beirut after experiencing technical problems during its voyage from Georgia to Mozambique. It was later abandoned by its Russian owner and mostly Ukrainian crew, prompting a lawsuit from creditors.

An unspecified number of port officials were placed on house arrest on Wednesday pending an investigation by the Lebanese government that is expected to take five days. Humans Rights Watch called for an independent probe into the blast, citing "serious concerns about the ability of the Lebanese judiciary to conduct a credible and transparent investigation on its own,” the BBC reported.

Amnesty International Acting Secretary-General Julie Verhaar echoed calls for “an international mechanism to be promptly set up to investigate how this happened,” The Guardian reported.

A survivor is taken out of the rubble after a massive explosion in Beirut, Lebanon, Wednesday, Aug. 5, 2020. (AP Photo/Hassan Ammar)

“They went down, thinking it was caused by fireworks,” one firefighter named Freddy said of his colleagues who first responded to a fire that ravaged the warehouse at the Port of Beirut before the following explosion rang out. “We were looking for our friends but there were also lots of people dead. It is total destruction inside. Nothing is where it should be.”

Australia pledged an initial 2 million Australian dollars ($1.4 million) to the relief effort in Lebanon. France, Russia, Germany and China were also sending search-and-rescue teams as well as doctors and specialists to treat the wounded.

The U.S. Embassy in Beirut said at least one American citizen was killed and several more were injured. More than 100 U.N. staff members and dependents were injured, and two family members of U.N. staffers were killed. At least 22 members of the U.N. peacekeeping force in Lebanon were among the injured.

German Foreign Minister Heiko Maas confirmed Thursday that an embassy employee was found to be killed inside her home in Beirut in the aftermath of the explosion, Reuters reported.

Some of the worst damage was in the leafy neighborhoods of Mar Mikhael and Gemayzeh in east Beirut, where the blast damaged some of the few historic buildings that survived the 1975-1990 civil war.

Balconies had dropped to street level, where bars and restaurants were buried and chairs and tables turned upside down. Nuns toured the churches along the streets, offering prayers and help. Supermarket owners filled plastic bags with the few remaining products in good shape— one saying he will take what is left home to use before it rots in the summer heat.

“Who will pay for this? This is not fixable,” Shiva Karout, whose gym, Barbell House, was destroyed by the explosion, told the Associated Press. “Beirut is already gone.”

Throughout the night, radio presenters read the names of missing or wounded people. An Instagram page called “Locating Victims Beirut” sprung up with photos of missing people. Another account helped to connect the newly displaced with hotels and homeowners who were willing to host them.

A damage is seen after a massive explosion in Beirut, Lebanon, Wednesday, Aug. 5, 2020. (AP Photo/Hassan Ammar)

A United Nations tribunal was expected to hand down its verdict this week for the four alleged Hezbollah members accused in the assassination, but the Hague, Netherlands-based court said in a statement it would delay the announcement “out of respect for the countless victims of the devastating explosion that shook Beirut on 4 August, and the three days of public mourning in Lebanon.”