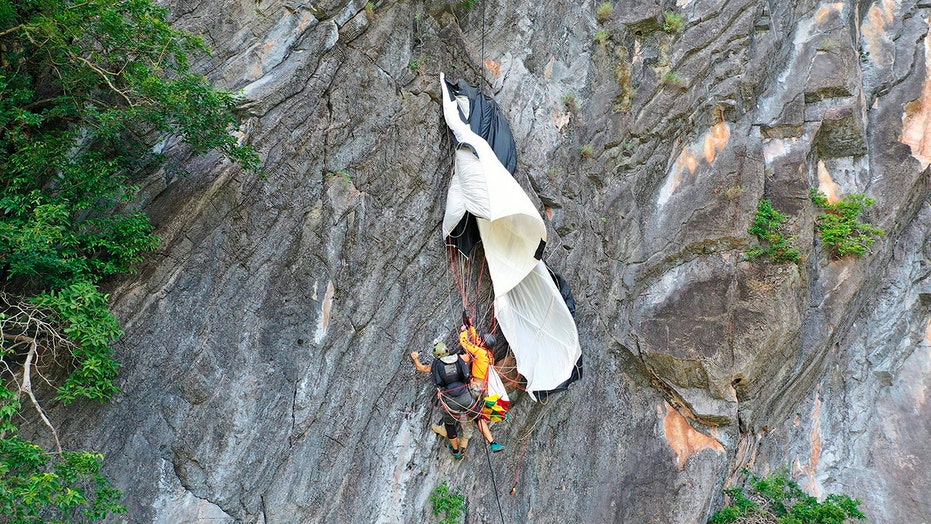 An Austrian BASE jumper was rescued in southern Thailand on Monday after his parachute became snagged on the rocky side of a near-vertical cliff, leaving the thrill-seeker dangling almost 600 feet above the ground for several hours.

Residents on the ground of Phatthalung Province spotted the parachutist, identified as 28-year-old Johannes Grasser, stuck on the Khao Ok Thalu mountainside at about 8:30 a.m.

BASE jumping is an extreme sport in which parachutists jump from elevated fixed platforms such as buildings, antennae, spans (bridges) or earths (cliffs).

Photos and video footage showed Grasser suspended by his parachute cords as rescuers worked to bring him to safety. The sight drew a large crowd of onlookers who watched the hourslong rescue unfold from below, according to the Bangkok Post.

It took rescuers several hours to reach Grasser and safely lower him to a ledge about 50 yards below. (Phatthalung Rescue Organization via AP)

“The rescue took so long because it took us hours to get up to the high spot where he jumped off the cliff," said Kittipong Chusongseang, a member of the rescue team. "It was a long hike up and a long walk down.”

Rescuers reached Grasser by about 2 p.m. after having had to hike more than two hours to reach the top of the mountain.

The team then lowered local rock climber Santhiti Rompothong by rope to reach Grasser. Rompothong tied a harness around the jumper, who was lowered about 50 yards to a ledge where a cave entrance was located. The mountain's name means “Hole Through the Mountain.”

Grasser was treated for minor injuries after being rescued from the edge of a cliff. (Phatthalung Rescue Organization via AP)

Grasser suffered light injuries when the wind banged him against the mountainside, Kittipong said. A photo released after the rescue showed Grasser with a bandaged right leg and being treated for cuts to his left leg.

He had been part of a BASE jumping team that performed a show on Thai Children's Day on Saturday, and returned to jump again with his wife on Monday.