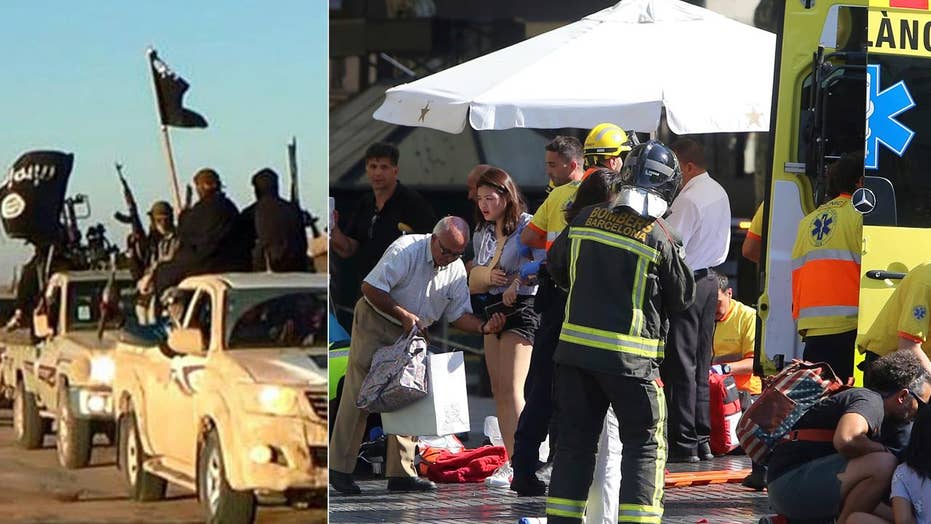 Witnesses of an attack in Barcelona's historic tourist district have spoken to Sky News.

Aamar Anwar, a human rights lawyer attending a conference, was walking down Las Ramblas when the attack happened.

He said the street was the busiest area of Barcelona and was "jam-packed" with tourists at the time.

"All of a sudden I heard a crashing noise and the whole street just started to run screaming," he said. "I saw a woman next to me screaming for her kids.

"Literally within 30 seconds, police vans, ambulances, police officers with guns were piling out, and we were sectioned off and then being pushed rapidly back. Everybody's just panic mode."

"Van upon van of police officers" arrived at the scene, he said, adding, "They have quite clearly unfortunately had to plan for something like this."

Ethan Spibey, a charity director, was on holiday with his boyfriend and noticed police as he was walking down the street.

"All of a sudden it was real kind of chaos... people just started running screaming," he said. "There was kind of a mini-stampede when we were down one of the alleyways.

"I didn't take the time to look back... a small child was actually knocked over and we made sure that the child was picked up."

Spibey said he had taken shelter in a church with four or five dozen other people.

"It seems like a lot of people have taken refuge in shops and local cafes," he said.

"They've locked the doors because I'm not sure whether the person who may have done it has actually been caught... We're just kind of waiting here."

Mel Higgins was on holiday with her family and was barricaded inside a shop after the attack.

She said she grabbed her daughters and took shelter in the store, where the doors were quickly locked.

"It seemed very calm out on the streets," she said. "We were just about to leave when people started running again and screaming and they said everyone back in."

They waited for a further 20 minutes in the shop before being told by police to go home as quickly as possible.

"You see all these things on TV and, even if you're safe, you suddenly understand how frightening it is," Higgins said. "So [her two children] were quite scared, as was I.

"It was just the unknown really, not really knowing what had happened."