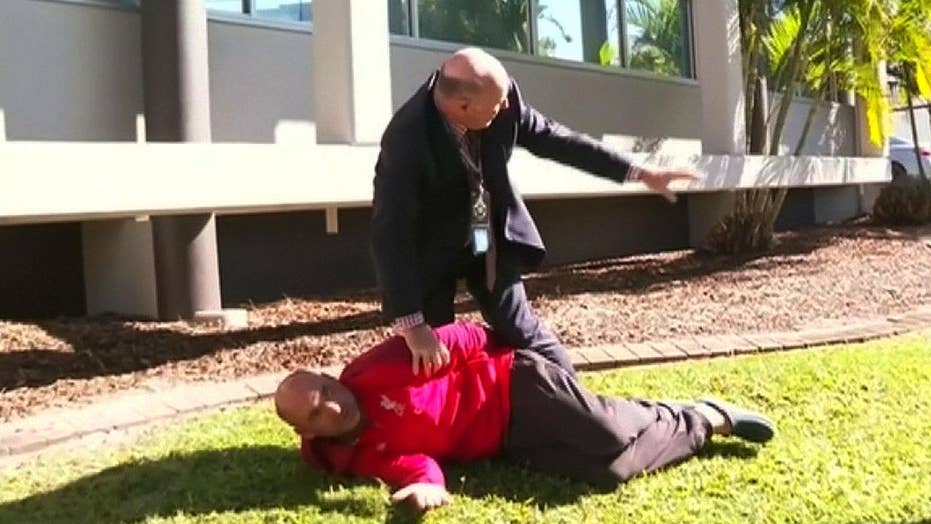 An Australian detective is being praised for his rugby skills after he abruptly stopped a news conference to tackle a man who was fleeing after he reportedly made inappropriate comments to a young girl.

Detective Senior Sergeant Daren Edwards was talking to reporters outside the Maroochydore Magistrates’ Court in Queensland Wednesday when shouts rang out behind him.

“Run!” one man can be heard shouting in the video obtained by Reuters, as another flees behind Edwards.

Quick-thinking Edwards turned around, dropped his shoulder and took the suspect down in what many called a textbook tackle.

“He’s been inappropriate to my daughter,” the man chasing the suspect said.

The man, who has yet to be identified by police, was arrested and taken into custody by police.

“Look it’s just one of those things you know,” Edwards said to reporters with a visible wound to his head following the takedown.

“Obviously the man had just been released and a young lady walking down the street had comments made to her which were relayed to her father which obviously provoked her father.”

The suspect allegedly made inappropriate comments to the man's daughter.  (Reuters)

He was arrested for “further public nuisance,” he said.

Edwards, a former player with the Redcliffe Dolphins, told  The Sunshine Coast Daily it was “good tackle.”

“I dropped the shoulder and tackled him,” he said. “Right around the knees, it dropped him.”