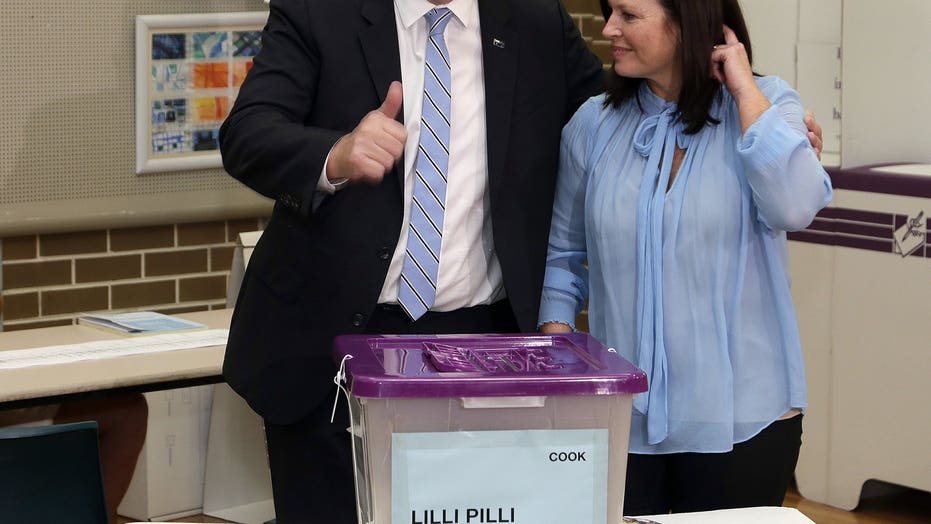 "I know that you're all hurting, and I am too. And without wanting to hold out any false hope, while there are still millions of votes to count ... it is obvious that Labor will not be able to form the next government,” he said. “In the national interest, a short while ago, I called Scott Morrison to congratulate him.”

Labor party supporters watch the tally count at the Federal Labor Reception in Melbourne, Australia, Saturday, May. 18, 2019. Voting has closed in Australia's general election, with some senior opposition lawmakers confident that they will form a center-left government with a focus on slashing greenhouse gas emissions. (AP Photo/Andy Brownbill)

Morrison used his victory speech to thank “quiet Australians” who led the coalition to the stunning political victory.

FACTS AND FIGURES IN AUSTRALIAN ELECTIONS ON SATURDAY

The conservative Liberal-National Party coalition is reportedly on course to win 74 seats in the 151-seat lower parliamentary house, with 65 seats to Labor and 12 undecided.

But there was at least one casualty on the conservative side. Former prime minister Tony Abbot conceded defeat in the Sydney seat he has held since 1994.

He lost to the independent candidate and Olympian Zali Steggall amid his opposition to the climate change action, a cause many of his voters cared about.

Abbot tried to put a positive spin on his loss, telling his supporters: “I want to say to you: there is good news and bad news. There is every chance that the Liberal-National Coalition has won the election.”

“So it’s disappointing for us in Warringah. I can’t say it doesn’t hurt to lose. But I would rather be a loser than a quitter.”

“I can’t say it doesn’t hurt to lose. But I would rather be a loser than a quitter.”

The win defies pre-election opinion polls that suggested the conservative coalition would lose the election, with Morrison having one of the shortest tenures as prime minister in the 118-year history of Australia.

Australian online bookmaker Sportsbet even paid out 1.3 million Australian dollars ($900,000) to bettors who backed Labor two days before the election.

The coalition is set to form a government for a third term despite the suffering from internal turmoil that culminated in the ouster of Malcolm Turnbull as prime minister for Morrison last August. The government then also lost two seats and its single-seat majority.

The Associated press contributed to this report.