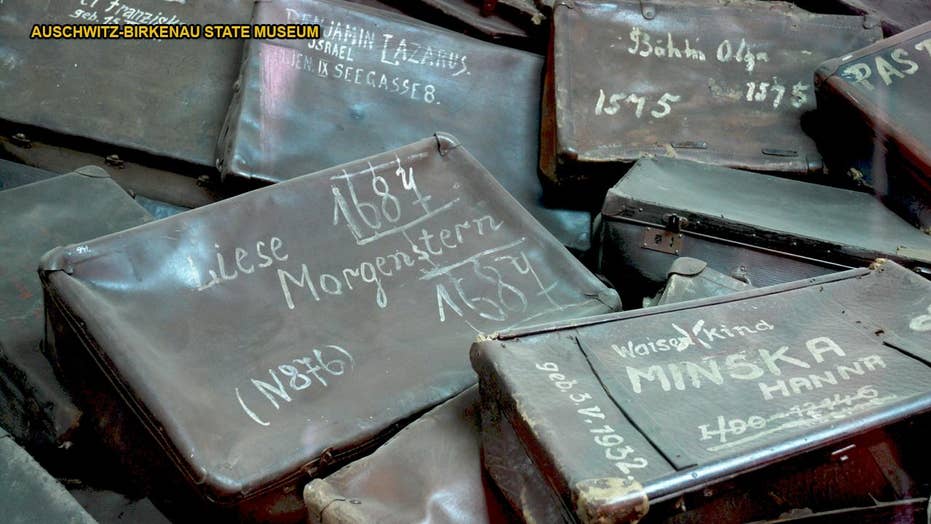 Survivors and dignitaries are assembling Sunday at Auschwitz-Birkenau to commemorate the 74th anniversary of the liberation of the Nazi death camp where more than 1 million people, mostly Jews, were murdered.

The number of survivors is shrinking each year, resulting in fewer personal testimonials.

“Soon we will no longer have people talking about their experiences,” said Pawel Sawicki, press officer for the Auschwitz-Birkenau State Museum.

Suitcases of Jews deported by the Germans to Auschwitz. On many of them personal information of their owners is still visible. (Auschwitz-Birkenau State Museum)

“The material evidence of the crimes must last as long as possible,” said Margrit Borman, one of the conservators who work at preserving the camp’s extermination infrastructure, as well as the artifacts left behind by the victims. “When no survivor of Auschwitz will live anymore, then the task of telling the story will devolve upon the items and relics of the former concentration camp and extermination site,” she said.

In a photo, wearing goggles over her glasses, Borman clutches with gloved hands a dry ice blasting machine as she removes the old coating from part of a grating used in one of the crematoria. The original preservative applied in the 1970s no longer prevents corrosion and must be removed before application of a new and more effective coating.

The victims’ personal belongings that have been preserved include 3,800 suitcases, 5,000 toothbrushes, 110,000 shoes, as well as prosthetic limbs. One day last year, Borman discovered a man’s comb. When viewing the comb through a microscope, she found his name – a Hungarian name – on the comb. Although there was no information about him in the databases either at Auschwitz-Birkenau, or at Yad Vashem in Israel, Borman feels she has redeemed his identity by finding his name.

Eyeglasses robbed from the victims of Auschwitz (Auschwitz-Birkenau State Museum)

HOLOCAUST REMEMBRANCE DAY: FROM THE BABEL TO SINAI

“Each battered suitcase, each decaying toothbrush, each pair of eyeglasses keeps the memory of their owners alive,” said Kostek Gebert, a prominent Polish author and columnist for Gazetta Wyborcza, Poland’s leading newspaper.

Andrzej Jastrzebiowski, a Polish conservator who works to remove corrosive sediment from the metal on suitcases, said there is often a profound effect on young people who visit the camp. “Sometimes they shake and cry when they touch an object,” he said.

Borman, who is German, says her job has a special personal meaning. “To conserve Auschwitz is my way of showing responsibility to the victims,” she said. Although, at 38, she is too young to take responsibility for the actual perpetrators, she says she still feels shame for the crimes of her people.

Auschwitz-Birkenau, situated on 472 acres, is located 31 miles west of Krakow in a suburb of Oswiecim, a small city in southern Poland. The conservators believe that the physical preservation of this complex serves to counter the Holocaust denial that stems from rising anti-Semitism and that is often spread on the internet.

Ronald Lauder, former U.S. ambassador to Austria and chairman of the Auschwitz-Birkenau Memorial Foundation, became involved when he first visited the camp in 1988. He was shocked by its state of disrepair after 40 years of neglect and made a personal commitment to preserve the site. He brought in conservators from the Metropolitan Museum’s Egyptian Wing to assess the situation and helped raise over $100 million to support the ongoing conservation efforts.

HOW A HOLOCAUST SURVIVOR NARROWLY ESCAPED THE NAZIS - TWICE

Sawicki believes the camp has the power to change people as they walk the same paths as the victims and see the ponds where the ashes from the crematoria were dumped.

“We want people to think of their own responsibility in the world today to fight anti-Semitism and xenophobia,” said Sawicki.

A recent poll commissioned by the European Union finds increased anti-Semitism throughout Europe, with 66 percent of Germans believing anti-Semitism is a problem in Germany.

“Their murders’ objective was not only to erase their lives, but to obliterate their very memory,” said Gebert. “Each attempt to preserve memory is therefore a blowback against the murderers, in a battle which, 80 years later (start of World War II), is still not over.”