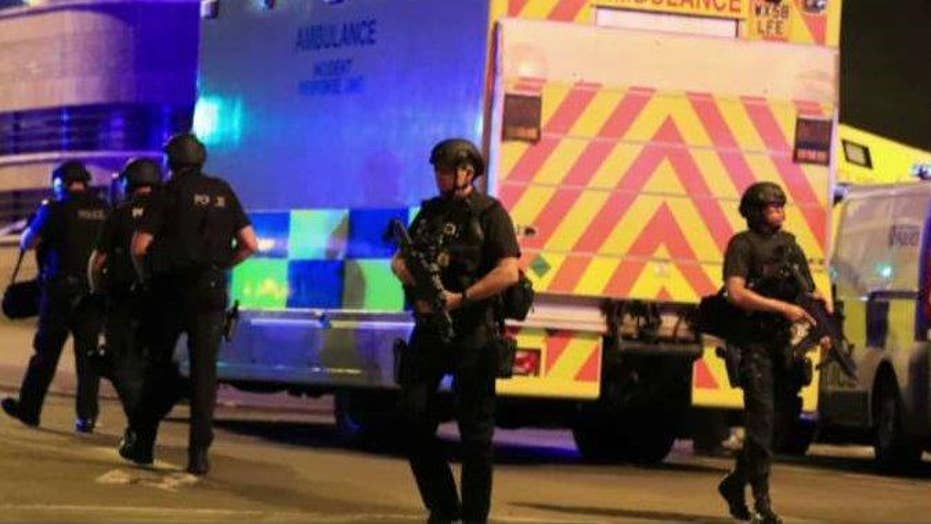 Witness: We heard the biggest explosion, everyone panicked

Witness describes hearing explosion just outside arena area, immediately thought it was a terror attack. 'It was just panic and chaos,' Chris Pawley said. 'Had we left 30 seconds later we would have been caught up in it. We're so, so lucky.' #Tucker

A witness who barely escaped the explosion outside the Ariana Grande concert in the U.K. on Monday described to Fox News the sound of the blast from only 20 yards away.

Pawley said he and his partner were leaving the concert at the time. They'd just walked past Manchester Arena's box office and were at the top of the steps at the nearby train station when they heard the blast. As they were about to enter Victoria Station, he said they were told to get out.

"It was the worst experience ever," he added. "We just ran to the car, didn't stop running."

He also recounted seeing crowds of parents waiting to pick up their children in the arena's foyer. Choking up, Pawley said no more than 30 seconds after passing them, the explosion unfolded -- not far from where those parents were standing.

"If we would have left... 30 seconds later, we would have been caught right up in it," he recalled. He said most of the concertgoers were children, with just one parent for each large group of kids.

Police swarmed the arena quickly, Pawley said, describing how the wail of sirens was all he could hear as he rushed to his car.

At least 19 people were killed and as many as 59 were hurt in the explosion at Manchester Arena, police said, adding that they were treating it as a "terrorist incident" until they knew otherwise.

'EVERYBODY WAS SCREAMING,' WITNESS SAYS

Pawley told Fox News he tended to keep an eye out for terror threats in Manchester, where he lived, after a series of attacks that hit London in recent years.

Still, he said he had no sense that any unrest could be coming. "I'm just confused to why anybody would want to do this to anyone. I just... haven't got a clue."

Video from inside the arena showed concertgoers screaming as they made their way out amid a sea of pink balloons.