A murder investigation was launched Friday into yet another suspicious incident involving yet another Russian exile living in Britain – the latest episode amid rising tensions between the two nations following the poisoning of a former Kremlin spy and his daughter.

Metropolitan Police said Friday an autopsy found 68-year-old Russian businessman Nikolai Glushkov had his neck crushed Monday. It was initially unclear if Glushkov had killed himself or been the victim of a crime.

The suspicious death occurred a week after former Russian spy Sergei Skripal, 66, and his 33-year-old daughter, Yulia, were poisoned by a nerve agent on March 4 in Salisbury. British authorities have blamed the attack on Moscow, with Foreign Minister Boris Johnson saying it's likely the order to poison the pair came directly from Russian President Vladimir Putin.

Russia has denied any involvement. 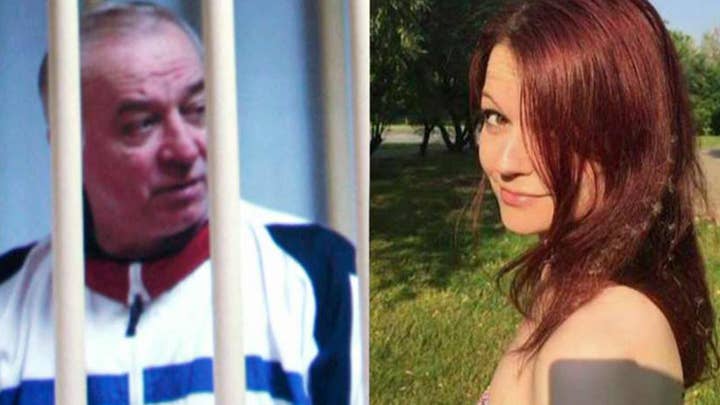 However, both incidents appear to be only the latest in a long line of Kremlin-ordered hits against spies and dissidents.

Russia spy agencies over the decades have found creative ways of silencing their enemies, including the infamous 1978 poisoned-umbrella stabbing in London of dissident Bulgaria writer Georgi Markov.

The most infamous recent assassination was that of Alexander Litvinenko. A former intelligence officer who defected to London in 2000, Litvinenko publicly accused his superiors of hatching an assassination plot against a Russian oligarch.

Alexander Litvinenko, a former FSB officer who defected to London in 2000, was killed with isotope-laced tea. (AP)

But while in London, Litvinenko fell ill in November 2006, dying soon thereafter. His death was ultimately attributed to drinking tea poisoned with radionuclide polonium-210.

A judicial inquest ruled in 2016 there was a “strong probability” Litvinenko’s death was a Russian intelligence operation that was probably approved by Putin.

In the last four years alone, dozens of high-profile Russians – including journalists, anti-corruption experts and politicians – have all died under suspicious circumstances.

Among those was late oligarch Boris Berezovsky, who was found hanged inside his London home in 2013. An inquest failed to determine whether he had killed himself or died due to foul play.

Late Russian oligarch Boris Berezovsky, who died in London in 2013, was associated with Russian exile businessman Nikolai Glushkov, who was found dead late Monday in his London home. (AP)

British media reported that Glushkov has associated with Berezovsky, a prominent critic of the Kremlin. He told the Guardian in 2013 that he “would never” believe his friend took his own life.

Glushokov, who is accused by the Kremlin for organizing a large-scale fraud scheme and embezzling $7 million from a Russian airline, is at the top of a list of “fugitives from justice” published by the Russian embassy.

“I think we have to remember that Russian exiles aren’t immortal,” Mark Rowley, assistant commissioner of the Metropolitan Police Service and Britain’s chief counterterrorism officer, told BBC radio. "They do all die, and there can be a tendency for some conspiracy theories. But likewise, we have to be alive to the fact of state threats, as illustrated by the Litvinenko case.”

The murder investigation completes a week of accusations made by the British government against the Russian state – all surrounding the suspicious poisoning of Skripal and his daughter with a military-grade nerve agent produced by the former Soviet Union.

U.K. Prime Minister Theresa May said it’s “highly likely” the Kremlin is responsible for the attack. On Thursday, in a rare joint statement, the leaders of Germany, the U.S. and France joined May in accusing Russia of being behind the attack.

Britain has expelled 23 Russian diplomats and suspended high-level contacts with Moscow due to the incident. Government officials and members of the Royal Family will also not be attending the soccer World Cup to be held in Russia later this summer.