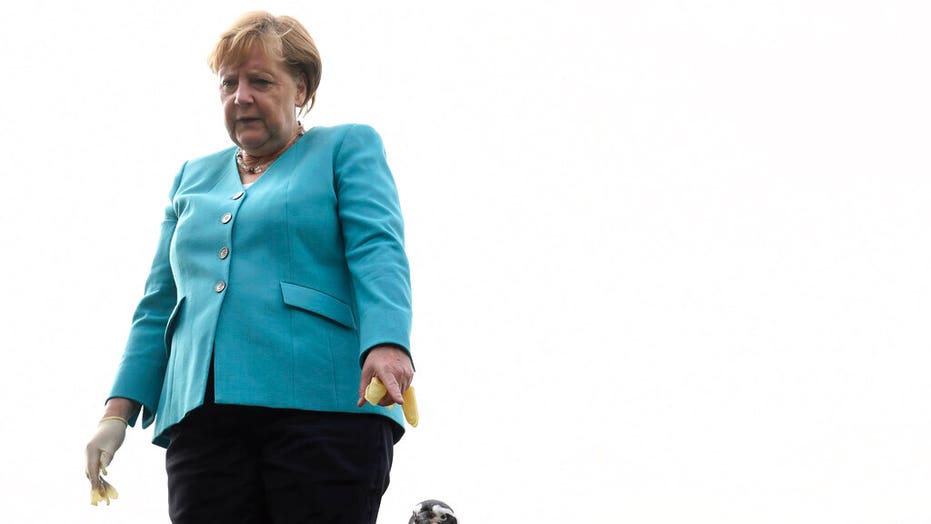 The leader of Germany, Europe’s wealthiest country, has once again rejected U.S. requests to keep a promise to spend 2 percent of its GDP on defense to ensure the continued viability of the NATO alliance.

Chancellor Angela Merkel’s alleged freeloading on the backs of the U.S. and other NATO member states that have contributed the 2 percent of gross domestic product might cause the U.S. to relocate its troops stationed on German soil to Poland.

“We said we want to achieve 1.5 percent by 2024. And that is our common will,” Merkel said on Wednesday, according to Reuters.

German Chancellor Angela Merkel stands next to a penguin after feeding it a treat, on the roof of the Ozeaneum in Stralsund, Germany, Tuesday, Aug. 13, 2019.  (DPA via AP)

U.S. Ambassador to Germany Richard Grenell told Fox News on Wednesday: “The Wales Pledge was made in 2014 and it gave a 10-year runway to get to 2 percent by 2024.”

In 2014, members of the North Atlantic Treaty Organization pledged, at the Wales Summit, to spend 2 percent of GDP on defense. Merkel has indicated, however, that her interpretation of that is “toward 2 percent,” not an obligation.

Speaking on Tuesday in Stralsund, Germany, she said: “So this means in the direction of 2 percent, and we will continue to go in this direction also after 2024.”

Critics see Germany playing with semantics regarding its obligation.

US Ambassador to Germany speaks to the press.

Last week Grenell suggested the U.S. should pull its troops from Germany if the country does not increase its required spending.

"It is actually offensive to assume that the U.S. taxpayer must continue to pay to have 50,000-plus Americans in Germany, but the Germans get to spend their surplus on domestic programs," Grenell told the Germany press agency DPA.

Grenell also wrote in a Tweet late last week: “There are 34,000 U.S. troops in Germany protecting Germans and Europeans… Americans don’t understand why Germany isn’t meeting its NATO obligations & helping the West. And they are growing annoyed by it.”

In addition, there are 17,000 U.S. civilian employees in Germany who support the American military presence there.

Grenell said last week: “It is offensive to assume that the U.S. taxpayers will continue to pay for more than 50,000 Americans [U.S. troops] in Germany, but the Germans get to spend their surplus on domestic programs."

James Jay Carafano, deputy director of the Davis Institute for International Studies and director of the Allison Center for Foreign Policy Studies, both at The Heritage Foundation, told Fox News: “Germany isn’t a front-line state anymore, but it is the hub for redeploying, reinforcing and sustaining NATO troops in front-line states like Poland. Indeed, American security commitments to Poland are only credible if we have the tail to support the tripwire in places like Poland, the Baltic States and the Black Sea Region.”

"Germany is an important and reliable ally. They will get there, but there is a lot that has to happen with Germany’s domestic politics as well as its international commitments. The U.S. needs to keep working the problem. The one thing Germany can count on is that the U.S. won’t forget Germany made a pledge that has to be fulfilled. It is actually Germany who will benefit most from meeting its commitments.”

President Trump has repeatedly criticized NATO members, specifically Germany, in the past for not stepping up to contribute more. In April, at a White House meeting with NATO Secretary-General Jens Stoltenberg, Trump said: "We've worked together on getting some of our allies to pay their fair share. At some point, it's going to have to go higher."

News on Wednesday that Germany is creeping toward a recession prompted the U.S. embassy in Germany to tweet: “Investment in the future is key­­­ –and where better to start than Germany’s Bundeswehr? [Germany's armed forces] 2 percent by 2024. NATO.”