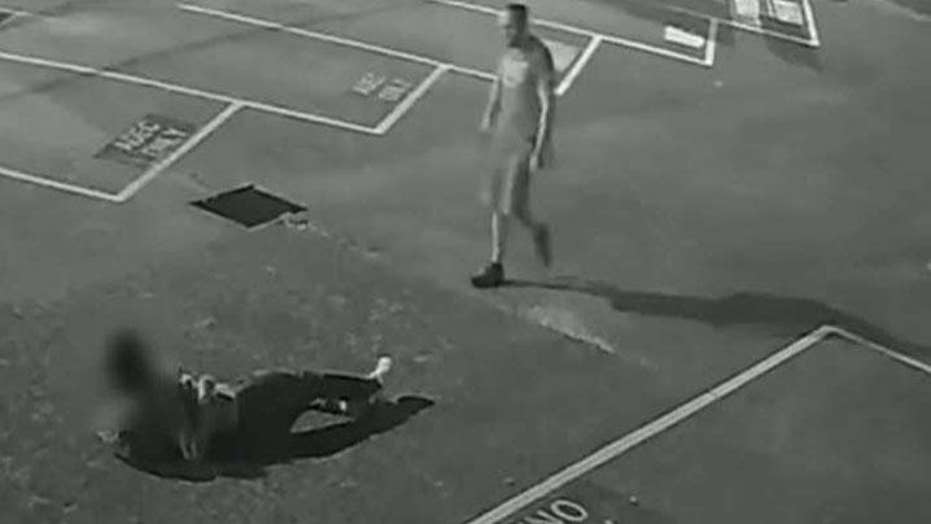 Police said the tourist was followed getting off of a tram.

Efforts were underway to find the suspect, the reports said.

The unidentified 32-year-old victim is a traveling musician visiting Melbourne, authorities said. He was walking away from a tram just before 11:30 p.m. Wednesday when the assault occurred.

"It appears to be unmotivated at this point. The victim is seen quite clearly stepping off a tram walking on his own. This unknown male runs up to him and we don't know why at this point," Victoria Police Det. Senior Constable Matthew Coleiro told the Australian Broadcasting Corporation. "He strikes him to the point he's unconscious, hovers over him and appears to taunt him. Once he regains consciousness he again continues the assault until he's unconscious again, hovers over him again, then leaves him in the middle of the road unconscious."

A screen capture from surveillance video shows a suspect standing over an unidentified American tourist who was badly beaten in Australia, according to police. (Victoria Police )

The man regained consciousness and found help from a passer-by 30 minutes later. He underwent two surgeries to stop bleeding in his brain and repair a broken jaw. Coleiro said the man also suffered some memory loss.

He was expected to fly home Saturday after spending six weeks in Australia.

"His family have been notified overseas. He's got no other real support network here in this country," Coleiro told the network.

Investigators are reviewing surveillance footage that caught the attack.

"Hopefully we can find out who this person is and he'll get some reassurance and some comfort in that," Coleiro said.