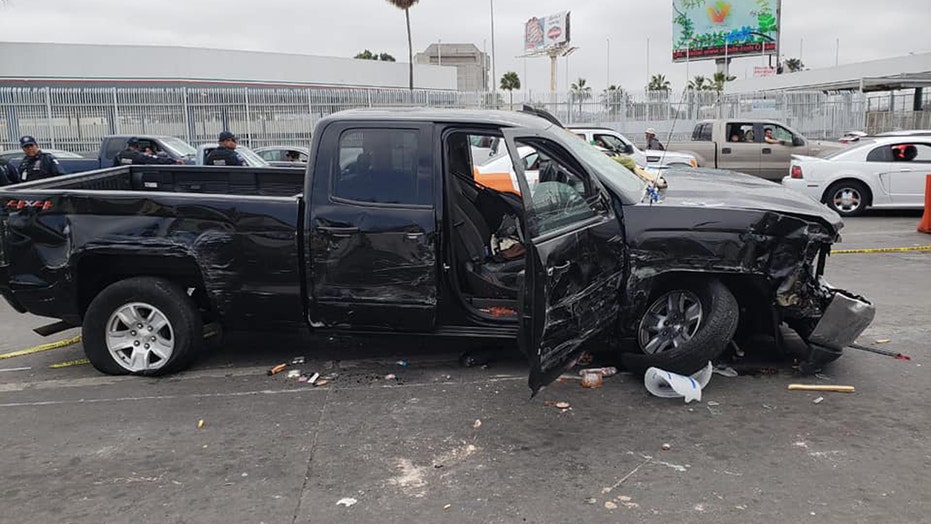 An American man was arrested after crashing into more than a dozen vehicles, running over five people and sending food cars careening out of control Monday near the busiest land border crossing between the U.S. and Mexico, Mexican police said.

The Tijuana Secretary of Public Security said in a Facebook post the man, who has not been identified, allegedly threatened a Mexican citizen with a knife on a roadway near the San Ysidro Port of Entry.

When police arrived, the man sped away in a black Chevrolet Silverado pickup truck towards the border crossing.

As the man fled, police said he rammed 17 other vehicles, knocked over 14 vendor carts and ran over five people.

A damaged truck is seen after Mexican police said an American man tried to rush the U.S. border in Tijuana and crashed into 17 vehicles, vendor carts, and ran over 5 people on Monday. (Tijuana Secretary of Public Security)

A witness to the chaotic incident told KGTV he heard a "boom, boom, boom" when he saw the black truck approaching him.  After striking three vehicles and stopping, the witness told KGTV that witnesses surrounded the vehicle and popped the tires

An American man was arrested after hitting 17 vehicles and running over 5 people during a chaotic incident near the San Ysidro Port of Entry on Monday. (Tijuana Secretary of Public Security)

The driver then took off again, hitting food vendors in his path.

PENTAGON APPROVES PLAN TO SHIFT $1.5B FOR WALL ALONG US-MEXICO BORDER

The witness told KGTV he pulled over to help a woman who was hurt after being struck by a taco cart sent careening out of control by the truck but ended up getting injured himself after slipping in some salsa.

The driver was eventually arrested in Mexico, according to police, who did not disclose the conditions of those struck by the vehicle.

U.S. Customs and Border Protection officials told FOX5 the border was not closed because of the incident.