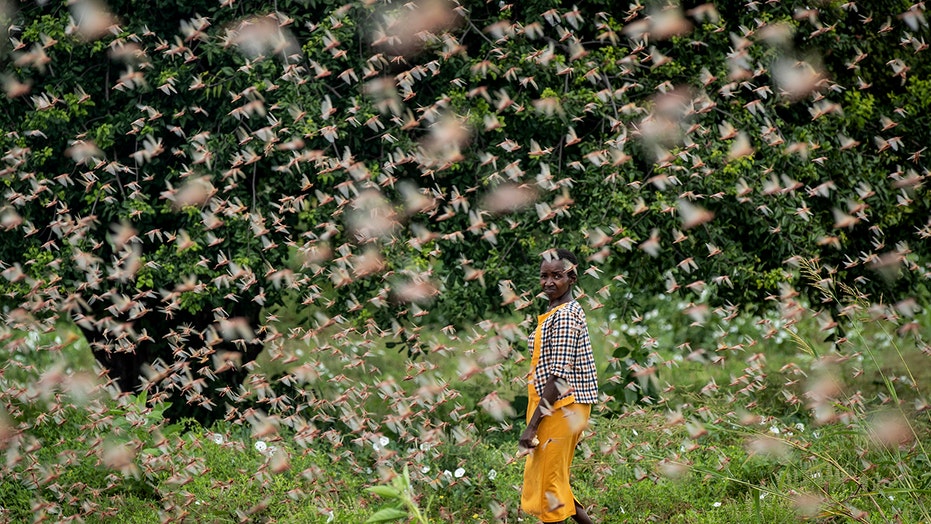 Hundreds of millions of locusts have swarmed Kenya in the worst infestation to hit the East African nation in 70 years, devouring vital farmland in a region already suffering from extreme hunger.

The plague of desert locusts swarmed into Kenya from neighboring Ethiopia and Somalia, where an outbreak on this level has not been seen in a quarter century.

“Even cows are wondering what is happening," said Ndunda Makanga, who spent hours Friday trying to chase the locusts from his farm. "Corn, sorghum, cowpeas, they have eaten everything.”

Kenyan media showed farmers clanging pots and pans as police shot bullets and tear gas at a swarm of insects to try to scare the voracious insects away from their crops, according to Reuters.

The locusts have overrun about 172,973 acres (70,000 hectares) of land in Kenya, devouring crops and destroying farmland as citizens face high levels of food insecurity. One swarm in the northeast measured 37 miles long by 25 miles wide (60 kilometers by 40 kilometers).

Farmers look across as swarms of pink desert locusts create a thick blanket covering trees on their farmland in Kenya on Friday. (AP Photo/Ben Curtis)

A single swarm can contain up to 150 million locusts per square kilometer of farmland, an area the size of almost 250 football fields, regional authorities said. A small swarm can consume enough food for 35,000 people in a single day, said Jens Laerke of the U.N. humanitarian office in Geneva.

A farmer looks back as she walks through swarms of desert locusts feeding on her crops, in Kenya on Friday. (AP Photo/Ben Curtis)

In Ethiopia, farmer Ahmed Ibrahim swung empty water jugs at a swarm feasting on his crop of khat, a mildly narcotic leaf, and described his plight to Reuters.

“We have nothing else to sell at the market. How will I feed my eight children?” he asked.

The insects are now heading toward Uganda, where such an outbreak has not happened since the 1960s, and South Sudan, where almost half the country faces hunger as it emerges from civil war.

Swarms of desert locusts fly up into the air from crops in Kenya on Friday. (AP Photo/Ben Curtis)

The locusts also are moving steadily toward Ethiopia’s Rift Valley, the breadbasket for Africa’s second most populous country, the U.N. said.

Farmers have pleaded for help in getting rid of the pests but so far have been gotten little consolation.