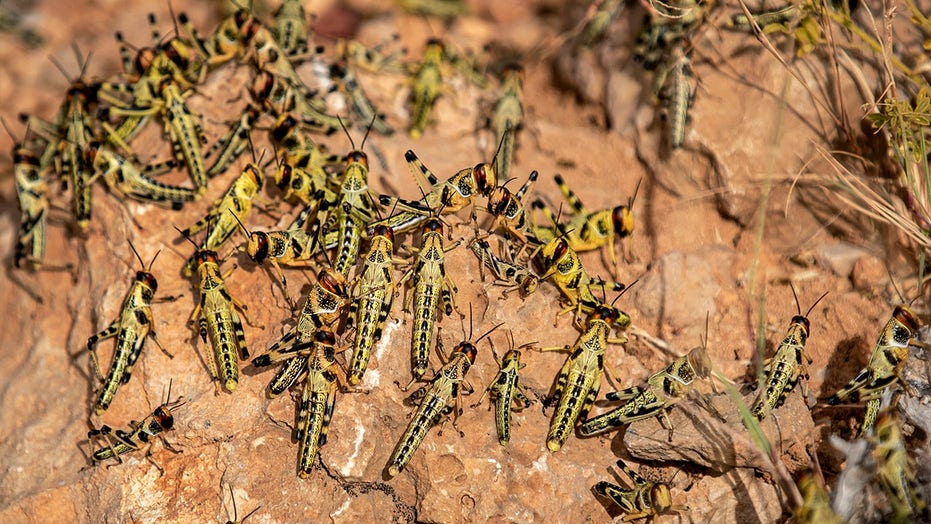 As an outbreak of billions of locusts continues to swarm parts of East Africa and devour its vital farmland, the United Nations warned Monday that the region, already suffering from extreme hunger, “simply cannot afford another major shock."

The horde of desert locusts has been destroying crops in Kenya in the worst infestation to hit the nation in 70 years. The insects invaded Kenya last month from neighboring Somalia and Ethiopia, which haven’t seen an outbreak on this level in a quarter-century.

Desert locusts jump up from the ground and fly away as a cameraman walks past, in Nasuulu Conservancy, northern Kenya on Feb.1. (AP Photo/Ben Curtis)

“Also over the weekend they moved into northeastern Uganda,” he told a news conference at U.N. headquarters in New York. “We’re expecting any day they will move across the border into the southeast corner of South Sudan,” where another several million people face hunger as the country struggles to emerge from civil war.

A single swarm can contain up to 150 million locusts per square kilometer of farmland, an area the size of almost 250 football fields, regional authorities have said.

Young desert locusts that have not yet grown wings crowd together on a rock in the desert near Garowe, in the semi-autonomous Puntland region of Somalia. (AP Photo/Ben Curtis)

U.N. officials warn immediate action is needed before more rainfall in the weeks ahead brings fresh vegetation to feed new generations of locusts. If left unchecked, they say their numbers could grow up to 500 times before drier weather arrives.

Across the region, it has the potential “to be the most devastating plague of locusts in any of our living memories if we don't reduce the problem faster than we're doing at the moment,” U.N. humanitarian chief Mark Lowcock said.

Pest-control sprayers demonstrate their work on the thorny bushes in the desert that is the breeding ground of desert locusts in the desert near Garowe on Fe. 4. (AP Photo/Ben Curtis)

While ground-based pesticide spraying is an ongoing effort, planes dumping pesticides from the air is considered the only effective control. The U.N. has said it will begin testing drones equipped with mapping sensors and atomizers to spray pesticides, Reuters reported.

The U.N. has asked for $76 million in immediate aid. So far just under $20 million is in hand, including $10 million released by Lowcock from the U.N. emergency relief fund and $3.8 million from FAO, officials said. The United States said Monday it has released $800,000 and the European Union has released 1 million euros.

“There is the risk of a catastrophe,” Lowcock said at the briefing. “The response today is not going to work unless there’s a big scale-up.”