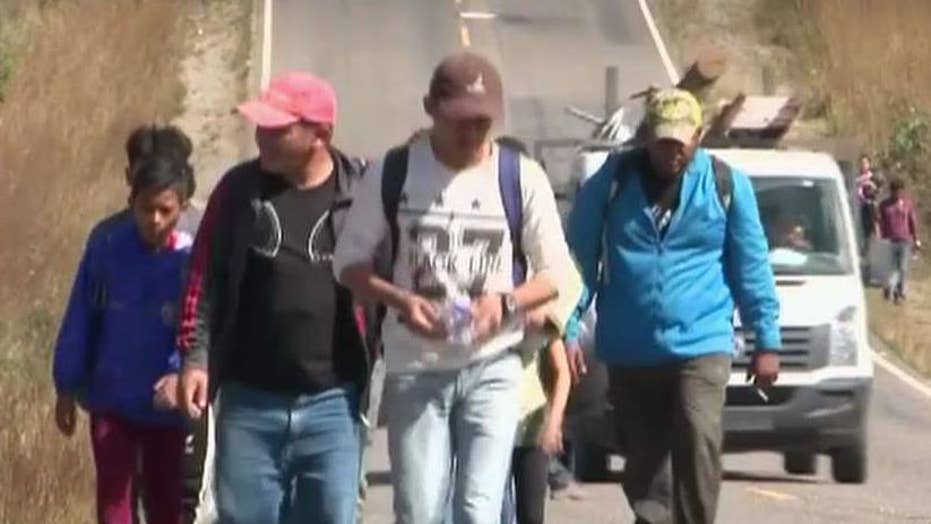 Caravan of Central American migrants crosses into Guatemala from Honduras

Some 2,000 migrants enter Guatemala saying they have dreams of a better life as they head toward the U.S. border; Griff Jenkins reports from Agua Caliente, Honduras.

As a new migrant caravan grew to more than 2,000 on its way from Honduras through Central America on Tuesday, Honduran authorities announced they had arrested and detained Juan Carlos Molina, and identified him as an organizer and promoter of the trip.

Molina, 26, was traveling with the caravan when Honduran authorities realized he had an outstanding warrant for rape charges from 2015, and arrested him, according to El Heraldo, a Honduran newspaper.

The reaction from many who have been tracking the movements of the caravans was “Who?”

AS NEW US-BOUND CARAVAN GROWS TO MORE THAN 2,000, MEXICANS LASH OUT

Molina’s name is a new addition to the list of people and organizations – in the U.S. and Latin America – who have been flagged as suspected organizers of the caravans.

The person widely recognized as the force behind the first caravan, which left Honduras last October, is Bartolo Fuentes, a former Honduran lawmaker and longtime immigration advocate.

Fuentes, who makes his contempt for Honduras President Juan Orlando Hernandez known at every turn, was traveling with the October caravan when Guatemalan authorities detained and deported him. Guatemalan authorities said that Fuentes had failed to register with migration officials after entering the country.

Fuentes, who hosted a show titled “Without Borders,” was hardly shaken by the experience, and granted several interviews to media outlets, including some in the U.S.

In an interview with the Daily Beast, he conceded that he organized the first caravan after he learned that groups of 200 or so were planning to head to the U.S. But he said he never expected the October caravan to grow so large and to get so out of hand.

NEW MIGRANT CARAVAN LEAVES HONDURAS FOR JOURNEY TO US BORDER

The pivot, as he tells it, happened when a woman interviewed about plans for the caravan on a popular Honduran cable station said that, with the help of foreign groups, Fuentes was ready to provide a large number of migrants wanting to flee Honduras with transportation and food.

“After that news program I started to get hundreds of calls, then it took on a life of its own,” said Fuentes, who acknowledged having organized other, much smaller caravans in prior years, to the Daily Beast last year. “No one expected this human avalanche.”

The Honduran government often has assailed Fuentes, calling him a human trafficker who misleads desperate Hondurans into thinking they will easily arrive at the Land of Milk and Honey if they join the caravan.

“In Honduras, the government wants to minimize why people are leaving—they know they are going to leave and they want to say they are doing so because of lies and the opposition, not the conditions that they created,” Fuentes maintained.

“This is in line with what the United States is saying—that there are false promises being made. And this pro-government news program played into that messaging, trying to say that there is financing when really people just need to get out.”

Fuentes, nonetheless, is still encouraging the caravans, and remains involved in at least facilitating them.

Last weekend, he posted a call on social media for donated goods for the caravan migrants.

Freddy Rivas, second right, of Tocoa, Honduras, sits with his sons Josue, left, and Elkin, center, and his brother Mario, as they wait with scores of other migrants hoping to join a caravan to travel to the U.S. border, in San Pedro Sula, Honduras, Monday, Jan. 14, 2019. Hundreds of Hondurans hoping to reach the U.S. began gathering at a main bus station in San Pedro Sula Monday night to join a caravan that had been advertised in social media as departing in the early hours of Tuesday morning. (AP Photo/Delmer Martinez) (AP)

“Volunteers will be collecting goods to support Honduran migrants,” said a flyer he posted that stated collections would take place Saturday and Monday, just before the first caravan left from San Pedro Sula later that evening. “Come and unite with our migrant compatriots.”

Then there are advocacy groups, such as Pueblos Sin Frontreras, or People Without Borders, who deny organizing the caravans, and say their role is only to lend humanitarian assistance to the migrants, as well as to “accompany them.”

But migrants have told U.S. and Latin American news outlets that some of these groups strongly encouraged them to make the trip, telling them they’d be welcomed with open arms.

“It’s probably a combination of groups,” said Ira Mehlman, spokesman for the Federation for American Immigration Reform, which advocates for stricter immigration enforcement. “There are opportunists that take advantage when you have governments that neglect the basic needs and security of their people.”

Citing former allies of the group, the Los Angeles Times reported that Pueblos Sin Frontreras played a very active role in organizing the caravans, even appearing to encourage migrants to get into confrontations with border officials at various points in their trip toward the U.S.

People once affiliated with Pueblos Sin Frontreras, which has locations in Honduras as well as elsewhere in Latin America and the United States, accuse the group of putting migrants in peril to advance its own interests.

“They are helping Donald Trump say there is an invasion,” said Alejandro Solalinde, whom the Times described as a Catholic priest and one of Mexico’s most prominent migrant activists.

In one incident that made headlines last year, some members of the advocacy group led a march in Tijuana that ended in a violent clash when some migrants tried to go over a U.S.-Mexico border fence into San Diego.

U.S.-bound migrants walk past security forces who are stopping some vehicles carrying migrants to check their documents in Cofradia, Honduras, early Tuesday, Jan. 15, 2019. Yet another caravan of Central American migrants set out overnight from Honduras, seeking to reach the U.S. border following the same route followed by thousands on at least three caravans last year. (AP Photo/Delmer Martinez)

The Mexico News Daily quoted one migrant as saying: “Pueblos Sin Fronteras told us not to worry, that there was going to be transportation, that Mexico was going to open the gates so that we didn’t have to enter [the U.S.] illegally, via the river . . .”

“What was offered to the caravan of Honduran migrants was a trap . . . The people that brought us to this place, supposedly [caravan] leaders, took advantage of us, they used us in a horrific way, what they did to us has no name,” he added.

“We came with enthusiasm . . . encouraging those who didn’t want to keep going . . . but when we got here our dreams went to hell.”

Pueblos Sin Fronteras responded to the criticism online, calling it mean-spirited and unfounded.

“For the past few days, Pueblo Sin Fronteras has been the object of multiple critiques and declarations that discredit the work we have done for years, and especially our accompaniment of this exodus,” it said.

“These declarations are irresponsible and by criminalizing and defaming us they increase the risks faced by all human rights defenders – both those who speak out and declare their solidarity from within their own contexts, as well as those who put their bodies on the line. These declarations also put members of the Central American exodus in grave danger.”

President Trump himself has weighed in with theories, one of which he voiced at a rally in Montana last October, accusing Democrats of involvement in the caravan and of creating conditions for the migration through failed policies.

But there is no evidence to support the claims.

Jorge Castaneda, a former Mexican foreign minister, said that the current caravan appears to be more grassroots than the others.

“It seems to have been organized through social media, it’s more autonomous than the previous ones,” Castaneda told Fox News in a phone interview from Mexico.

Castaneda said regardless of what person or groups may have organized the first caravans, many people in Honduras, El Salvador and Guatemala need little persuasion to risk the dangerous trip that comes with no guarantees.

Castaneda said the long journey of Hondurans and other Central Americans is nothing new, but that the increasing risks -- of being robbed, raped and murdered along the way to the U.S.-Mexico border -- created the conditions that made traveling in groups of hundreds and thousands more tempting.

“If you’re a father with a wife and three children in Honduras, and you’re worried about being killed," he said, "and you see on social media that a caravan is going to the United States, and you see pictures of that woman with that little girl who [ended up] in Los Angeles, and he thinks that he might get in, too.”