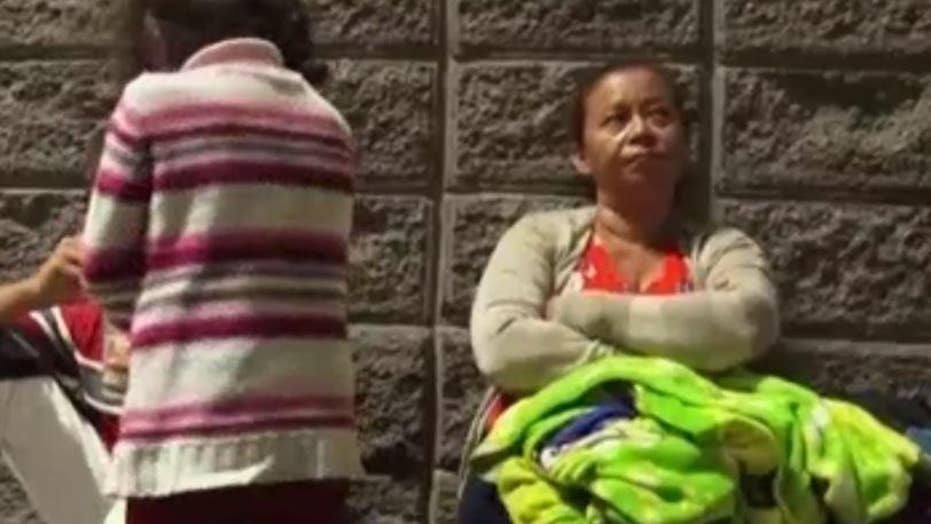 New caravan of at least 500 migrants started its journey from Honduras to the United States border.

As a new caravan that began in Honduras and quickly swelled to an estimated 2,000 people made its way toward Mexico on Tuesday, Mexicans who live along the border towns that will likely be most affected took to the Internet to lash out against another wave of migrants.

“Work? Yes, there might be work for people who actually want to work, not for the lazy bums looking for entitlements,” said one commenter, with the screen name Azucena Santos, in Spanish on a YouTube page belonging to Shialeweb, who was recording the caravan. “Poor Mexicans, what’s in store for you!”

Juan Palomina remarked: “Now look, let’s see if whacko [Mexican President} Lopez Obrador mobilizes the Marines and keeps these idiots from coming to Mexico. Give them enough to eat, at least.”

Some urged the migrants not to be blindly optimistic.

“People of Honduras, all of you who are spinning these grand illusions and getting ready to come on this caravan and in any future others, before you leave your country, please inform yourself about how people who’ve already come on previous caravans are faring in Tijuana,” said Belem Gonzales.

“Mexico is just like your country,” Gonzales added. “There are many problems and needs, and you’re not going to be much better off than you were in Honduras. Please don’t trust these manipulative agitators who are encouraging you to risk everything for nothing.”

Luis Mendez was far more unwelcoming. “We do not want caravans of (emojis of rats). Fight conditions in your own country. You are not welcome here.”

By Tuesday afternoon, a caravan that started with about 500 people grew to about 2,000, according to a representative from the Honduras National Commission of Human Rights, which travels with the caravan.

Word of the caravan’s departure was out at least as far back as last week. The newspaper La Prensa, of Honduras, reported on Jan. 9 that a caravan was scheduled to leave from San Pedro Sula on Tuesday - though the first group left the evening before.

Migrants hoping to reach the U.S. wait in line to board a bus toward Honduras' border with Guatemala, as hundreds of migrants set off by bus or on foot from a main bus station in San Pedro Sula, Honduras, late Monday, Jan. 14, 2019. Yet another caravan of Central American migrants set out Monday from Honduras, seeking to reach the U.S. border following the same route followed by thousands on at least three caravans last year. (AP Photo/Delmer Martinez)

The newspaper attributed the information to the immigration advocacy group “Pueblos Sin Fronteras,” or “Communities Without Borders,” as well as to “Dignificacion Humana,” or “Dignifying Humans.” Both groups said that some 4,000 migrants in all would end up being part of the caravan.

The hostile social media comments on Tuesday are the latest reflection of tensions that have simmered since the caravans began last year. The tension is particularly prevalent in Mexican cities like Tijuana, where many of the migrants are being held in overcrowded shelters.

Some say the concerns by people in receiving communities are, even if pointed, understandable. But others say the migrants deserve compassion for trying to flee conditions – often life-threatening – they did not create, and cannot control.

The mix of exasperated migrants in overtaxed shelters and Mexican residents growing increasingly concerned about strains on communities has led to a number of clashes. In November, for instance, about 300 Tijuana residents held an anti-caravan demonstration at the same time Central American migrants were holding a protest. The dueling demonstrations ended in a huge fight, with police stepping in and escorting the migrants to various shelters.

On its website, the immigrant advocacy group “Consejo Noruego para los Refugiados,” which is based in Colombia and has various offices in Latin America, decried the backlash against the caravan on “growing xenophobia in the U.S., as well as in Mexico.”

“The journey north will be extremely dangerous and taxing for thousands of families from Honduras, El Salvador and Guatemala that will be part of the trips in 2019," the group said. "Probably the obstacles will increase along the journey, given that there’s fatigue and frustration in the communities that have until now supported the caravans.”

Several migrants told U.S. and Latin American news outlets they were determined to flee the poverty and violence in their homeland - no matter how tough U.S. immigration policy had become. Some said they were deported after having taken part in the first caravan last year, and were trying their luck again.

Meanwhile, on Tuesday, Honduran authorities arrested and detained Juan Carlos Molina, identified by La Prensa, the Honduran newspaper, as a coordinator of the latest caravan.

Ira Mehlman, spokesman for the Federation for American Immigration Reform, which supports tighter enforcement, said the departure of another caravan was not surprising, considering indications there are individuals or organizations coordinating them. “Probably there are multiple parties involved, who have an interest in challenging the sovereign right of the United States to determine who can enter the country and under what circumstances,” he said.

“You have opportunists and you have people who, understandably, want to come to the United States,” he said, “It’s a situation that’s getting out of hand, and no one is doing anything about it other than an administration that trying to solve things through executive action.”

Mehlman said the backlash the caravans were getting from Mexicans who live in Tijuana and other areas affected by the large crowds of migrants was a logical reaction to the feeling of being overrun. “It does have an impact on people who live in the affected towns, just as it has impact on people in our country,” he said, adding that at the same time that understanding is extended to people who seek a better life, there needs to be understanding for “the motivations of people who want to set limits and enforce laws.”