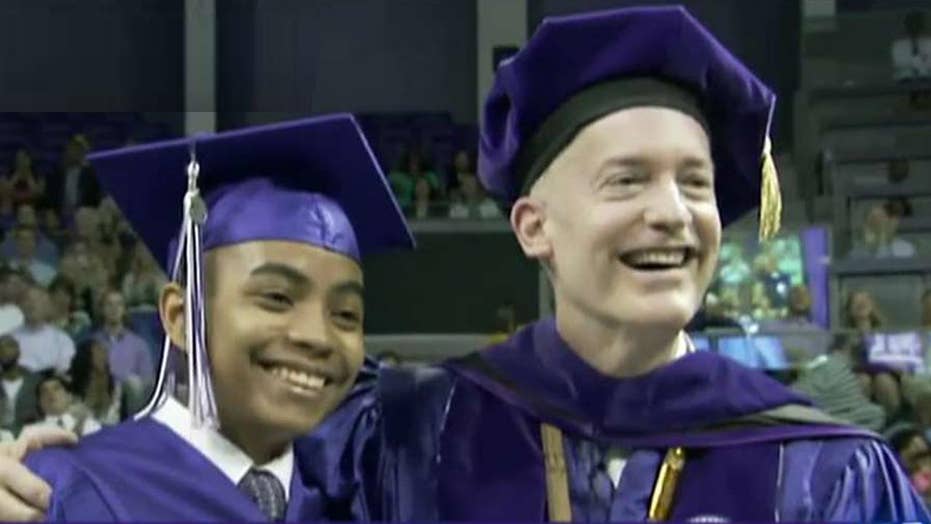 A 14-year-old physics major who was the youngest person to graduate from Texas Christian University said he doesn't regret missing out on the normal "college experience."

"Nothing at all," Carson Huey-You told Ainsley Earhardt on "Fox & Friends" Tuesday.

"Overall it was a positive experience. I really liked going and learning all the stuff that I can learn to grow," he added.

The teenager joined more than 2,000 students at graduation on Saturday to get his diploma at the Fort Worth school founded in 1873.

"It was very exciting, but I was also really really nervous. I actually ended up walking past the dean of Science and Engineering and not giving him a handshake," Huey-You recalled.

Huey-You started at TCU in 2013 when he was just 11 years old. He also earned a minor in Chinese and math. Huey-You now plans to get his graduate degree in quantum mechanics.

Though he is the youngest to graduate from the university so far, Huey-You has some competition: his 11-year-old brother Cannan who will also be attending TCU in the fall.

TRUMP TO LIBERTY U GRADS: RELISH BEING AN 'OUTSIDER'

As for the secret to having two successful children? Huey-You's mother, Claretta Kimp, said there's no "magic pill."

"I think I did what every other loving parent does. I nurtured, showed a lot of patience and was there for them to just support them in whatever direction they wanted to go," Kimp told Fox & Friends.