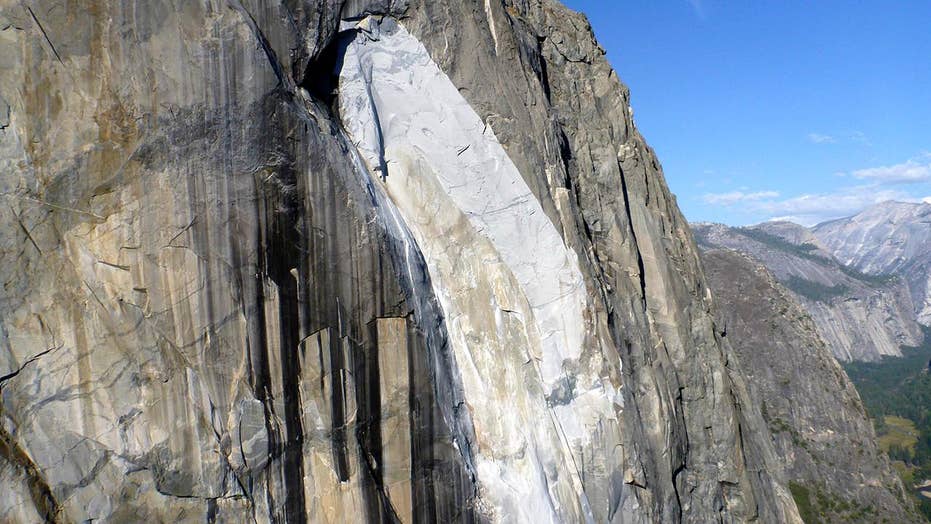 Massive hunk of rock sheers off iconic El Capitan, one day after a rock fall in the same area killed a British tourist and seriously injured his wife; William La Jeunesse reports from Los Angeles.

At least one person was airlifted from Yosemite National Park Thursday after a massive rock fall Thursday -- just one day after a slab plummeted from El Capitan, killing a British climber and injuring a second.

Thursday's rock fall was much larger than Wednesday's on the iconic rock formation, Ken Yager of the Yosemite Climbing Association said. He described a large cloud of dust filling the sky as sirens wailed.

Images from the park showed a huge plume of smoke in the wake of the rock fall. Yager said traffic on a road near the base of El Capitan was stopped.

Fox News has learned that one person was injured and flown out of the park via air ambulance to a hospital.

Thursday’s slide unfolded around 3:30 p.m. local time, according to KNTV.

A climber at Yosemite said the second slide was easily "three times the size" of the first.

Ryan Sheridan had just reached the top of El Capitan when Thursday's slide let loose below him.

He told The Associated Press that "there was so much smoke and debris" and clouds of dust filled the entire valley below.

He said Thursday's rock slide happened in the same location as the one that occurred a day earlier.

It was on Wednesday when the first granite slab described as "the size of an apartment building" fell off the face of El Capitan, leaving at least one climber from the UK dead and his wife injured.

Sources identifed the victim to Fox News as Andrew Foster, 32, of Wales. His wife, who remains unidentifed, is undergoing medical treatment at an area hospital.

"I saw a piece of rock, white granite the size of an apartment building, at least 100 feet by 100 feet, suddenly just come peeling off the wall with no warning," said Canadian climber Peter Zabrok, 57, who was scaling El Capitan and was above the rock fall said on Wednesday.

El Capitan is one of the world's largest granite monoliths, towering 4,000 feet above Yosemite Valley.

Mountaineers from around the world travel to the park in the Sierra Nevada to scale El Capitan's sheer face. Autumn is one of the peak seasons because the days are long and the weather is warm.