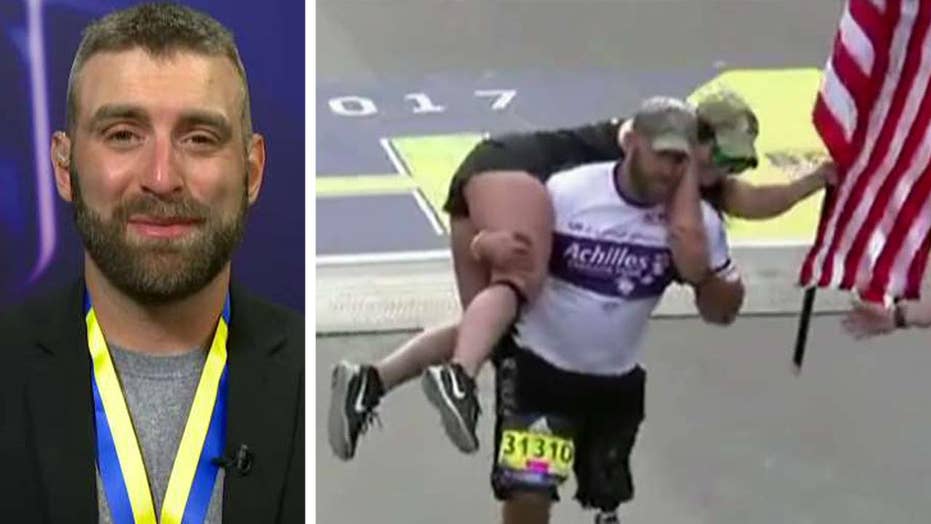 Earl Granville also carried his guide over the finish line

The wounded veteran who captured the hearts of viewers across the country when he crossed the Boston Marathon finish line carrying his running guide and the American flag said he is overwhelmed by the attention.

“I had no idea it would go this viral,” Earl Granville, a 9-year veteran of the Pennsylvania Army National Guard on “Fox and Friends” on Wednesday. “It was just a spur of the moment.”

He said he was running down Boylston Street with his guide Andi Piscopo when he decided to pick her up and walk the last 100 yards with her on his back. They were part of the Achilles Freedom Team, a group of wounded warriors who have become marathoners.

Granville lost his left leg and two close friends to an IED blast nine years during his third tour in Afghanistan.

“I just gotta say I got lucky and I’m grateful,” he said. “It’s guys like those … that I do this athletic events for – to show the world that we can fight this adversity.”

After this injury, Granville competed in multiple marathons including Boston, New York, Chicago and Detroit all using a hand-bike. He said two friends – one who is double amputee – challenged him to run it this year.

It wasn’t easy. Throughout the race, Granville’s leg kept cramping up and had to stop several times at medic tents.

After the fourth time, he figured out that the “only option is to keep walking or quit and I wasn’t going to quit.”

A video of Granville crossing the finish line has been viewed more than 8 million times since posted on Monday. The veteran said he is proud to be a reminder to people of what is good in our country.

“Four years ago, our nation came under attack from a terrorist threat,” he said. “Seeing the resilience in the city of Boston … we can learn to pick ourselves up and go through any tragedy.”